“What does it mean when we have more women in power?” Klobuchar asked the audience that included Gov. Gretchen Whitmer, U.S. Sen. Debbie Stabenow (D-Lansing), Attorney General Dana Nessel, Secretary of State Jocelyn Benson and several other Democratic women leaders.

This was Klobuchar’s second visit to Michigan in the early days of the 2020 Democratic primary campaign, after she spoke at a Detroit conference earlier this month. Prior to the Detroit luncheon, she appeared at an Ann Arbor event with U.S. Rep. Debbie Dingell (D-Dearborn) about protecting domestic violence victims from gun violence.

Klobuchar has struggled to gain traction in polling in a crowded field of 20-plus candidates thus far. But the longtime Minnesota pol, who ran almost 13 points ahead of Democratic former President Barack Obama’s re-election campaign in 2012, hopes her appeal to the Rust Belt communities now-President Donald Trump won over in 2016 can boost her among voters desperate to remove him from the White House.

The senator emphasized in her speech Saturday the importance of electing Democrats at all levels, especially in light of the Republican-controlled Alabama Legislature’s abortion ban in an effort to force the U.S. Supreme Court to re-evaluate Roe v. Wade.

“You all know what’s happening this week. It happened in Georgia, and happened in Alabama, and happened in Missouri, and now they’re trying to do things in Michigan. They are literally taking this on to take away a woman’s right to choose,” Klobuchar said.

“No matter where people are on this issue, they’d like to bring abortions down,” she continued, arguing that the number of abortions in the country decreased during the Obama administration “because we funded Planned Parenthood, and we made contraception available. … This is going to be a major debate in this country, and it is right now in Michigan in the coming months.”

Klobuchar covered familiar ground in the rest of her remarks, recounting her middle-class upbringing as the daughter of a teacher and a journalist, and railing against the Trump administration’s perceived failures in fighting the opioid crisis and protecting the working-class Americans he championed during his 2016 campaign.

She also acknowledged the recent death of U.S. Court of Appeals Judge Damon Keith, applauding him for dedicating “his life to correcting injustices and fighting for equality under the law.”

She cited his opinion ruling against the administration of former President Richard Nixon regarding its wiretapping efforts, saying his assertion that America is a “nation of laws and not men” applies equally to the Trump administration amid its various scandals and investigations.

“This is why we need a Democrat in the White House,” Klobuchar said while concluding her speech, “to stop the voter suppression, to make sure we put in judges that obey the law, to pass my bill, by the way, to register every kid in this country [to vote] when they turn 18 years old.”

“We have fantastic candidates, but the key is when we get to Election Day that we are united, that everyone votes, that no vote is suppressed, and that is how we will win.”

Saturday’s luncheon was held by the Michigan Democratic Party’s Women’s Caucus, which celebrated an historic number of women in Michigan government after 2018’s elections. State House Minority Leader Christine Greig (D-Farmington Hills) rattled off many of their names before Klobuchar’s speech, before hitting Republicans for their legislative priorities.

“Republicans are working on budgets right now that say we can continue to cut our way to good schools, good roads, and clean water, and we know that is just not right,” Greig said. “Our health care is under attack and we’re doing very little to create a fairer, quality [auto] insurance system for Michiganders, especially those in this great city.”

Michigan Democratic Party Chair Lavora Barnes took a victory lap around the party’s 2018 successes and Michigan’s transformation into a hub for the 2020 primary – including now three nights of scheduled debates. Barnes said she “[tells] all the Democratic presidential candidates that the road to the White House runs right through Michigan” — similar to statements Whitmer has made — and that the party is “poised and ready to win more and more elections” next year.

The governor spoke before Klobuchar on Saturday, as well, motivating the audience to get out the vote in 2020 by saying that “we know the consequences of what an election means when it comes to appointments to the [U.S.] Supreme Court … people who say they care about life and put children in cages.

“This election matters incredibly to our future, to our children, to our day-to-day life as Americans, and the state of Michigan is going to decide this [presidential] election,” Whitmer said, praising Klobuchar and the other Democrats who have come through the state.

Stabenow rounded out the group of Michigan’s Democratic heavyweight women who presided over the luncheon, introducing her Senate colleague by saying that although “across our state, racism, division, and religious persecution are being encouraged at the highest level of our government,” she was grateful that “we don’t have to tell [Klobuchar] about how important the Great Lakes are … [or] about what we care about in Michigan, because she fights for that for Minnesota every day.”

Republican National Committee spokesman Michael Joyce issued a statement Saturday criticizing Klobuchar’s “radical, cookie-cutter ideas,” saying that she is “going after President Trump’s economic agenda when she really should be combing through her own record in search of any success.” 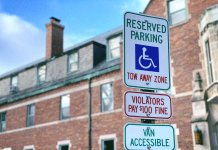