With U.S. Sen. Kamala Harris’ two-day swing last week, Michigan has now been graced with the presence of most major 2020 presidential contenders.

No fewer than 11 Democrats — plus both President Donald Trump and Vice President Mike Pence — have stopped by. Candidates continue to act as though it could all come down to the Mitten, although, and I stress, there are 540 days to go before the general election.

Biden’s campaign is less than three weeks old, but he can be expected to give Michigan some love sooner than later, as his Rust Belt appeal is core to his campaign. Detroit Mayor Mike Duggan already said he’d run Biden’s campaign, if asked, and the former veep seems the most likely of any hopeful to pick up formal support here.

It has been awfully quiet on the Michigan Dem endorsement front, probably because there are 22 candidates — and counting. Even U.S. Sen. Bernie Sanders (I-Vt.) has yet to capture any, even from high-profile Democratic socialists like U.S. Rep. Rashida Tlaib (D-Detroit).

It’s notable that progressive U.S. Sen. Elizabeth Warren (D-Mass.) has yet to made her Michigan debut, although she did send a video to a Women Organize Michigan conference. And South Bend, Ind., Mayor Pete Butegieg hasn’t crossed the border yet.

So what can we divine from all these visits? Let’s talk geography and let’s talk issues. If you want to know campaigns’ strategy, look at what they’re focused on and where they spend the most finite of resources: their time.

Trump’s No. 2 went old-school in April, doing a Romulus fundraiser, touring a Dearborn Ford plant and speaking at a Taylor auto supplier, while stressing the administration’s yet-to-be-ratified trade deal.

While Pence’s visit ostensibly showed the president is making the economic case to the white working class, the real strategy was belied by Trump ally Steve Bannon’s rowdy anti-immigration rally in Detroit in March. It’s not that there are many votes to snag in the heavily African American city — and let’s face it, few attendees called Detroit home. The event was meant to be a show of force for a campaign that’s really about the culture war.

Harris keynoted the Detroit NAACP fundraiser, where she took aim at the “electability” narrative for leaving out women and people of color. One of the centerpieces of her campaign is a $13,500 raise for teachers, so she toured two schools in Detroit and one in Dearborn and held a town hall with American Federation of Teachers members. In the past, Democrats have flirted with or outrightly embraced school choice, but those days appear to be over.

African American voters and the state’s largest county would seem to be central to Harris’ plan to triumph in Michigan’s March 10 primary.

Former U.S. Rep. Beto O’Rourke, whose campaign has been criticized as being unfocused, split the difference and traveled to the three major Southeast Michigan counties: Wayne, Oakland and Macomb (his Detroit stop was a last-minute add-on). O’Rourke, who hails from not-very-union-friendly Texas, stressed the importance of organized labor in building the middle class while visiting a Carpenters’ training center.

U.S. Sen. Kirsten Gillibrand (D-N.Y.) campaigned on the Green New Deal in two Oakland County appearances in March, including one with Fems for Dems. Gillibrand is concentrating on suburban women, particularly in the 11th congressional district flipped by now-U.S. Rep. Haley Stevens (D-Rochester).

She’s one of several hopefuls who started out their bids courting the new left by embracing their agenda. But most supporters have stuck with Sanders anyway, because primaries are about personality more than policy, even if no one (including journalists) wants to admit that.

Sanders, not surprisingly, stumped in Macomb County, whose white, blue-collar populace was decisive for Trump in 2016 (few pundits note that Democratic standard-bearer and now-Gov. Gretchen Whitmer also won the fiefdom last year, but, hey, that narrative isn’t as fun). Sanders took a victory lap on the Democratic Party embracing his economic platform, as well as a shot at the “establishment” — something he’s since ramped up with Biden’s strong showing.

Sanders notably also held a union event in Coopersville in deep red Ottawa County. U.S. Tim Ryan (D-Ohio) did one stop on the west side, keynoting a Kent County Democrats’ fundraiser and talking about growing concerns about PFAS contamination.

Grand Rapids was, of course, where Trump kicked off his ‘20 campaign, and he reminded everyone that also was his last stop before winning the 2016 election, as he’s wont to do. The rally, which had a strong presence of QAnon conspiracy adherents, drew around 10,000.

We’ll see if more hopefuls break out of the metro Detroit box on their next jaunts through Michigan. 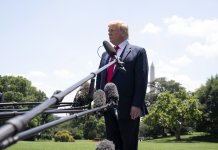 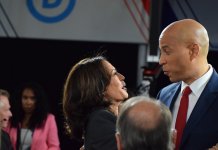