A federal court decision Thursday that ordered Michigan to hold special elections in at least 10 state Senate districts next year could cut short the terms — and possibly the legislative careers — of several of the chamber’s senators.

That’s something that the Advance first reported in January could be a byproduct of the case.

Any neighboring districts affected by that redistricting must be redrawn, as well, setting off a chain reaction that government relations attorney Peter Ruddell previously told the Advance could lead the state to “have to redraw a majority, if not all [of] the Senate districts.”

Under Michigan’s term limits law, legislators are only eligible to serve two, four-year terms in the state Senate. The ruling states that senators in the redrawn districts who are currently in their second term will not be eligible to run for re-election, bringing their tenure in the state Senate to a close two years earlier than expected.

Out of the 10 state Senate districts ruled unconstitutional, six are currently held by Republicans and four by Democrats.

Horn, Stamas and Theis filed briefs in League of Women Voters v. Benson voicing their opposition to the proposed redistricting.

Horn and Stamas did not immediately respond to a request for comment.

On Thursday, state Senate Majority Leader Mike Shirkey (R-Clarklake) said in a statement, “The Senate is reviewing the details of the ruling and will file an appeal to the U.S. Supreme Court.

“We will prepare to comply with this most recent ruling while we await the outcome of the appeal,” he added.

Ananich said Thursday, “If, at the end of the day, we’re to run in 2020, we will run robust races as we always have done.”

The Eastern District Court’s three-judge panel gave the state Legislature and Gov. Gretchen Whitmer an Aug. 1 deadline by which the new maps, which would cover not just the state Senate but also its House and numerous, if not all U.S. congressional districts, should be passed into law. If they fail to do so, the panel said it would itself draw the new maps.

The U.S. Supreme Court is expected to rule in upcoming months on two similar cases of partisan gerrymandering in Maryland and North Carolina, the latter in favor of Democrats and the former tilted toward Republicans, like in Michigan.

Response to Thursday’s decision was mostly split along partisan lines, with Democrats cheering the ruling and Republicans decrying it as evidence of an overly activist court.

Jessica Post, executive director of the Democratic Legislative Campaign Committee (DLCC), said in a statement Thursday that the court “called out Republicans for trying to cheat voters and rig the system,” pointedly adding that “Michigan isn’t Russia. In our country, voters are supposed to pick their representatives — not the other way around.”

U.S. Rep. Bill Huizenga (R-Zeeland), who represents a West Michigan safe GOP district, criticized the decision, saying that “judges and courts should not be in the business of drawing legislative boundaries.

“… I believe this ruling will be appealed and the underlying litigation will continue to work its way through the courts,” he added.

Republicans and Democrats were united, however, in seeing the ruling as an opportunity to raise money. Michigan Senate Democrats sent out an email appeal saying that “holding Senate elections in 20 months puts us dangerously behind in fundraising… We will be unable to support districts that could flip the Michigan Senate for the first time in 20 years if we don’t raise more — and raise it fast.”

There is some genuine concern from Democrats that state Senate races will be badly underfunded, as money will flow to both the presidential election, with Michigan as a key battleground state, and the U.S. Senate race, with freshman U.S. Sen. Gary Peters (D-Bloomfield Twp.) on the ballot.

Republicans, for their part, wrote that “Democrats are celebrating the decision of an activist Federal court to throw out the state’s legislative districts… Democrats know this is their best opportunity to thwart the will of Michigan voters, overturn our majorities in the State House and Senate, and give Governor Whitmer a clear path to passing her leftist agenda. Please help us, donate today!”

In the unanimous ruling, U.S. Circuit Judge Eric Clay wrote that “the ‘predominant purpose’ of the Enacted Plan [current legislative map] was to subordinate the interests of Democratic voters and entrench Republicans in power… By diluting the weight of Democratic voters’ votes, the Enacted Plan has made it more difficult to energize the party’s base, register voters, recruit candidates, mobilize and attract volunteers, raise money, and motivate people to vote.”

If the Legislature draws new districts for 2020, it would be the only instance in which those maps would be used before a newly formed independent redistricting commission will take over that duty for the 2022 elections. 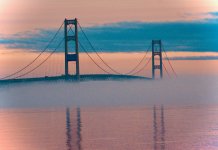