U.S. Rep. Haley Stevens (D-Rochester) held a roundtable discussion Tuesday on voting with some Michiganders who aren’t even eligible to cast a ballot.

Their audience in Livonia was a dozen Farmington Public Schools government students. The experts talked about the importance of voter participation, especially for young people.

They also outlined what’s changed after the passage last fall of Proposal 2, which establishes a nonpartisan redistricting commission, and Proposal 3, which expanded voting rights.

The body will be composed of four Republicans, four Democrats and five people who identify with neither party. It bars partisan officeholders, their employees, lobbyists and others with ties to the current system from becoming commissioners, Wang told the students.

“The commission is going to form in 2020,” she said. “We’re going to get the data back from the [U.S.] Census and the lines will be drawn in 2021. We’ll see a whole new set of maps that will look nothing like they do now.”

Stevens is serving her first term on Capitol Hill.

“I consider myself extremely lucky to hail from a district that had the 10th-highest voter turnout of all 435 congressional districts last fall,” she said.

She also said the 11th Congressional District spanning Wayne and Oakland counties is “one of the most gerrymandered districts in the country.”

Dolente pointed out that her organization partnered with the NAACP, League of Women Voters and others to campaign for Proposal 3. The measure allows no-reason absentee voting, straight-ticket voting and voting by mail, among other provisions.

Prior to Proposal 3, absentee voting was allowed in certain circumstances in Michigan, such as for those older than 60 or for voters who were out of town on Election Day.

Benson, who also was first elected in 2018, announced that she will launch a statewide, mock election in high schools leading up to the 2020 general election.

“It’s a great way, even if you are not 18 yet and not eligible to vote, to make sure that your voice is heard,” Benson said.

Stevens told the students that she is a co-sponsor of House Resolution 4, which is the Voting Rights Advancement Act of 2019. The measure seeks to restore protections invalidated after the U.S. Supreme Court’s Shelby v. Holder decision.

Prior to that, certain states and local governments were required to obtain federal preclearance before implementing any changes to their voting laws, which often disproportionately impacted African-Americans.

“[It] divides communities and is confusing to voters,” Stevens said.

After the presentation, Rianne Malloy, a 17-year-old at Farmington High School, said she “learned a lot more, in general, about why voting rights are so important and how we are working so hard to make sure that everyone has the right to vote.” 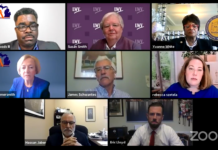