Another presidential contender is heading to Michigan, with U.S. Rep. Tim Ryan (D-Ohio) slated to headline a Kent County Democrats’ fundraiser next month.

Ryan was announced as the keynote speaker for the 2019 Spring Gala on May 4 before he declared for president, county party Chair Gary Stark told the Advance on Thursday.

“He’s always been a strong voice for blue-collar workers and organized labor, which will clearly be issues in Michigan this next election year,” Stark said. “We’re anxious to hear his message about how the Democratic Party can help the working people of Michigan.”

The Kent County Democrats are not endorsing any presidential candidate.

Next month, U.S. Sens. Kamala Harris (D-Calif.) and Amy Klobuchar (D-Minn.) are slated to be in Michigan.

Ryan, who announced his presidential candidacy on April 4, has served in Congress since 2003 representing the Youngstown area.

“I could win Pennsylvania, Ohio, Michigan, Wisconsin; rebuild the blue wall; and take out Trump,” Ryan told Time in an interview last week. “I don’t want it to be just about beating Trump. It’s got to be about totally forging a new politics in the country that realigns things. It’s got to happen.”

Ryan is perhaps best known for unsuccessfully challenging now-U.S. House Speaker Nancy Pelosi (D-Calif.) in 2016 when Democrats were still in the minority, following Trump’s election. He initially was part of a group fighting her speakership in 2018, but dropped his opposition.

The fundraiser is scheduled at 6 p.m. at the Eberhard Center at Grand Valley State University. It’s the county party’s major fundraiser of the year. 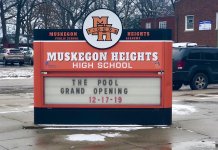