Measures against “sanctuary counties” gained momentum Tuesday in the Legislature after a state House panel sent House Bills 4083 and 4090 to the floor for consideration. Majority Republicans say the legislation is meant to clarify local police and sheriff departments’ roles in federal immigration enforcement.

The two bills — called the Local Government Sanctuary Policy Prohibition and County Sanctuary Policy Prohibition acts — would stop local government and counties from enacting or enforcing a law, ordinance, policy or rule that stops law enforcement or other local employees from “communicating or cooperating with appropriate federal officials” regarding someone’s immigration status in Michigan, according to the nonpartisan House Fiscal Agency’s analysis of the legislation.

“This simply allows law enforcement a clear framework in which to do their jobs,” said state Rep. Pamela Hornberger (R-Chesterfield Twp.), who sponsored HB 4083.

But Democrats, immigrant rights and civil liberties groups are decrying the plan as racial profiling in the making.

A hearing in the House Military, Veterans and Homeland Security Committee boiled over this week as Chair Beau LaFave (R-Iron Mountain), gaveled down a Democrat who compared the preemptions to how southern cities reacted to slavery abolition. He also stopped several speakers who said the bills only create confusion for local law enforcement and would lead to racial profiling.

LaFave, who sponsored HB 4090, declined to “get into specifics of which communities” have such policies because he said many have “unwritten rules,” which “are the most nefarious of all.”

He said the legislation is based on the idea that “an officer shouldn’t be allowed to be fired or demoted or any sort of political retribution for calling for backup from federal law enforcement. So this is, first and foremost, a police officer protection act, and because that’s exactly what we’re doing we thought we should name it as such.”

Garza, chair of the Legislative Latino Caucus, also spoke out against the plan at a Michigan United press conference before the committee hearing.

The Ingham County Sheriff’s Department, meanwhile, sent Chief Deputy Sheriff Jason Ferguson to testify against the legislation in committee, because “a sheriff needs to be free to function without this mandate, and without the blanket approach this bill has.”

Critics also argue it will strain police-community relations and thwart criminal investigations as Latinos grow warier of talking to police out of a fear of deportation.

Garza called the legislation a complete “waste of our time,” a sentiment echoed by other Democrats, including state Rep. John Chirkun (D-Roseville), who was interrupted by LaFave’s gaveling after the lawmaker drew an analogy to slavery.

“Back in the day when there was slavery, cities passed their own laws, so that allowed them to do that. Some cities did it, some people didn’t. And it was all ruled unconstitutional back after [President] Abe Lincoln won the war,” Chirkun explained to the Michigan Advance after the hearing. “So they told them they couldn’t do it anymore.

“And I’m drawing the analogy now — these cities that are doing this, it’s against the Constitution as it is,” he continued. “So I think this is an exercise in futility, doing something here that doesn’t need to be done because there are laws on the books that are already there.”

One of the most intense moments in the hearing came after LaFave interrupted ACLU Michigan Policy Counsel Kimberly Buddin-Crawford during her statement.

“I apologize,” LaFave said, after gaveling until she fell silent. “But it is against House rules to impugn motivations on members of the Legislature for their reasoning behind introducing bills. There will be no toleration of any member of the public saying that members introduced these bills to intentionally discriminate against the public. That will not be tolerated.”

“We have seen the negative effects similar policies have had around the country — further eroding the fragile trust between immigrant populations and local law enforcement and disincentivizing community members from coming forward when they witness or are the victims of a crime,” said committee member Rep. Mari Manoogian (D-Birmingham). “That makes us all less safe in the long run.”

The full House will now consider the legislation, which would need the approval of the full House, GOP-led Senate and Democratic Gov. Gretchen Whitmer before becoming law. 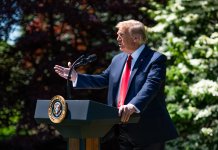