Officials from the Michigan Department of Education (MDE) defended their proposed new standards for the state’s social studies curriculum on Tuesday during an occasionally heated State Board of Education meeting.

The meeting was held in the wake of a recent New York Times report that highlighted the now-years-long controversy over those standards. Some Michigan Republicans, led by former 2018 gubernatorial candidate and state Sen. Patrick Colbeck (R-Canton), have accused them of having liberal bias.

According to MDE Deputy Superintendent Venessa Keesler, the new standards include “more room for perspectives that have been present all along [in America], but maybe have not necessarily been prioritized,” including the LGBT community, racial minority groups and those with disabilities.

Keesler emphasized in her opening comments to the board, however, that the process of developing the standards for social studies education was “not about politics.”

The two Republicans on the board refuted that idea, however, with former state Rep. Tom McMillin (R-Rochester Hills) describing the idea that such a process could be thoroughly de-politicized as “Orwellian.”

“The idea is to try to be as neutral as possible, but it will still have bias,” McMillin said, asserting later that the authors of the standards intended to “start way left[-wing], then give a little so [the standards are] still extremely left.”

The board’s other Republican, Nikki Snyder, was more conciliatory, saying that the process was “very political,” but that both sides of the dispute needed to negotiate from a position of “trust” and “mutual respect” in order for the new standards to better serve Michigan’s students.

McMillin proposed a motion to reject the standards as currently drafted and send them back for further revision before the currently planned public hearing period. The vote was defeated 6-2 along party lines.

The new standards in question include an expanded list of mandatory references to issues like climate change, LGBT rights, and civil rights for minorities, but much of the criticism from conservatives like McMillin and Colbeck has been regarding a slightly more esoteric subject — whether or not it’s appropriate to refer to the country as a “democracy.”

“When you read Article IV, Section IV [of the U.S. Constitution], it says you’re guaranteed a republican form of government,” Colbeck told the New York Times, referring to his preferred nomenclature.

The former state legislator, along with other conservatives like Oakland County Circuit Court Judge Michael Warren, who served on the MDE’s various “task forces,” pushed for the erasure of references to small-d “democracy” throughout the standards document. Colbeck told the Times its use was not “politically neutral and accurate.” 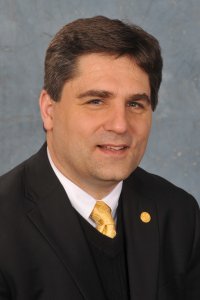 The MDE began revising Michigan’s standards in 2014. The department invited Colbeck to participate in its drafting the following year after he, while still in office, wrote a 13-page critique of their alleged bias. His participation led to the removal or diminishing of references to subjects like Roe v. Wade, the NAACP and the Ku Klux Klan, according to a report last year from Bridge.

Most of those references, along with numerous references to “democracy” and “democratic values,” were restored after a public outcry. The MDE subsequently expanded its advisory group to be more inclusive, and established another “task force” to police their suggestions for political bias.

The new draft runs 146 pages and will be subject to further review and revision after a series of nine “listen & learn sessions” that will be held over the course of the next month across the state. After those are completed, the board will hold a final vote on the standards during its June 11 regular meeting.

According to the MDE, all involved parties have invested roughly 30,000 combined hours of work into developing the standards over the course of almost five years. “More than 363” volunteers have contributed to writing the standards, and the MDE claims that they “represent diversity geographically, culturally, ethnically, racially, and religiously.”

Warren, the conservative judge, is listed as a contributor to the 2018 revisions in the most recent draft, while Colbeck is not.

Several of the board’s Democratic members praised the MDE’s work, with recently elected member Tiffany Tilley commending the department for its thoroughness and extensive review.

“Not only are Michiganders watching; the nation is watching,” Tilley said. “We need to take lots of time.”

Column: U of M resident physicians have stepped up in the pandemic. They deserve a fair contract.