Katie Fahey, like many people in the immediate aftermath of now-President Donald Trump’s election, was not happy.

“My disappointment makes me not trust the rest of the world,” she told the Associated Press after the results became clear, before stating her intent to “wear sweatpants and curl [herself] up in a corner.”

Unlike most people, however, the West Michigan native decided to go beyond expressing her displeasure at the ballot box in 2018 — she wanted to shape what was on it.

Fahey led the successful effort through her nonprofit group, Voters Not Politicians, to pass Proposal 2, which will hand power over Michigan’s legislative and congressional redistricting after the 2020 census from the governor and the Legislature to an independently appointed committee.

A documentary portraying that effort, “Slay the Dragon,” will premiere next month at the prestigious Tribeca Film Festival founded by actor Robert DeNiro in New York City.

“It was a really cool experience to be able to highlight [our work], and we had them follow a lot of volunteers across the state,” Fahey told the Advance this week.

The film from Participant Media, the studio best known for “Spotlight” and “Green Book,” explores both the recent history of gerrymandering in America and Fahey’s efforts to combat it in Michigan. The documentary is directed by Barack Goodman and Chris Durrance.

Fahey, a 29-year-old Aquinas College graduate, was working at a state recycling nonprofit when she started Voters Not Politicians after grieving Trump’s victory. Her work converting that disappointment into a sense of civic urgency eventually helped turn the effort into a fundraising juggernaut to the tune of more than $15 million.

Fahey says the “Slay the Dragon” documentarians approached her in early 2017, before signature-gathering had even started for Proposal 2. They heard about her from Kevin Deegan-Krause, a political science professor at Wayne State University and redistricting advocate. Deegan-Krause would later join Fahey’s effort, speaking on behalf of Proposal 2 alongside former gubernatorial candidate Abdul El-Sayed and Detroit organizer Kortni Malone.

“Especially when [the documentarians] first hopped on board, nobody was taking us seriously, and they probably weren’t sure at all if we would amount to anything,” Fahey said. “It’ll be exciting to reflect and see that two-year journey, because we accomplished a ton.”

The characterization is accurate. The effort, which started with just a Facebook post two days after the 2016 election, grew into a professional campaign that brought national press attention to a notoriously wonky subject.

That surprising success led to opposition from groups that painted Fahey’s effort as a partisan power grab on behalf of Democrats, who stand the most to gain after Republicans were in complete control of the last two redistricting processes after the census in both 2001 and 2011.

Princeton scientist and election analyst Sam Wang described the phenomenon in the New York Times in the wake of the 2012 election as the “Great Gerrymander of 2012,” noting that Michigan was one of five states in what cycle in which the party that won more than half the votes (the Democrats, in this case) failed to win at least half the seats.

But Fahey argues that putting redistricting in voters’ hands is as nonpartisan of an issue as one is likely to find.

“Democrats and Republicans have both taken part,” Fahey said. “Republicans did it really well as a political strategy in the last census, but Democrats have used it just as much, especially in states where they can. They’re just worse at it.”

Voters passed Proposal 2 last year by more than 20 points after a successful signature-gathering campaign that survived a state Supreme Court battle to get on the ballot.

“This process that’s normally done by a handful of people behind closed doors trying to one-up each other for political reasons will now be a process that millions of Michiganders can participate in,” Fahey said. “They can now have a say in the next 10 years of elections, not only as commissioners but in attending future community meetings.”

Fahey now serves as executive director of the new, national nonpartisan organizing nonprofit The People. When asked which reforms she’s looking forward to in the future, she cited the spread of open primaries (Michigan already has them), strengthening the petition process after legislators curtailed it during the Lame Duck session, and exploring possibilities for ranked-choice voting.

Fahey cited Hugh McNichol, a longtime activist who worked with Voters Not Politicians and is now helping to lead a renewed push for ranked-choice voting in Michigan, as the Advance has reported. She hopes that others will follow suit after seeing her own group’s metamorphosis in “Slay the Dragon.”

“As we were building [Voters Not Politicians], it was a ton of work, and it felt like recreating 1,000 wheels,” Fahey said. “We want to pay it forward to the next group of organizers so they can have an easier time, and the documentary can be another aspect of that, too.” 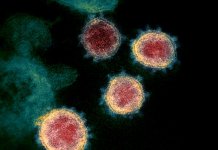