For roughly five hours on March 22, 2014, same-sex couples in Michigan were, at long last, able to tie the knot.

U.S. District Judge Bernard Judge Friedman issued his ruling in DeBoer v. Snyder after 5 p.m. on March 21 — quite the Friday night news dump. Gay marriage had formally been banned in Michigan since voters approved a constitutional amendment in 2004.

On that Friday night, county clerk offices were already closed. But four clerks made the call to open on Saturday and issue marriage licenses to scores of eager couples.

Marsha Caspar, now 57, and Glenna DeJong, 58, were the first same-sex couple legally wed in the state of Michigan. DeJong recalls waking up early on that Saturday morning in Lansing and reading online that Ingham County Clerk Barb Byrum’s office would, indeed, be open that day.

“We just got all excited,” DeJong recalls. “… We’d been waiting a long time.”

Twenty-seven years, to be exact.

By that afternoon, a federal appeals court stayed Friedman’s decision, and the marriage equality window slammed shut again. It wouldn’t open again for more than a year — not until the U.S. Supreme Court on June 26, 2015, made same-sex marriage the law of the land.

But on that day, 323 same-sex couples said, “I do,” in Ingham, Oakland, Washtenaw and Muskegon counties.

A lot has changed in the five years that have passed.

It may seem like a lifetime ago when Republican Attorney General Bill Schuette fought marriage equality tooth and nail (and, somewhat less fervently, so did then-Gov. Rick Snyder, who was the lead defendant in the case).

But for the thousands of LGBTQ people in Michigan, being denied that basic dignity and respect was simply excruciating.

By now, everyone knows the name of the lead attorney representing lesbian couple April DeBoer and Jayne Rowse: Dana Nessel. This year, she succeeded Schuette as the state’s 54th attorney general and holds the distinction of being the first openly gay person to hold a top statewide office in Michigan.

Few things encapsulate the metamorphosis in Michigan politics better than that.

On that Saturday, Glenna DeJong and Marsha Caspar dashed to the county courthouse, arriving before 8 a.m. The weird thing was, no one was around.

Caspar ended up rapping on the window and Ingham County Clerk Barb Byrum let them in — an hour earlier than other clerk offices were opening. They began filling out their paperwork and that’s when “we heard all this noise behind us, all the clicking of cameras and cell phones,” Caspar recalls.

Dozens of couples and reporters had finally arrived — and since DeJong and Caspar didn’t have witnesses, they snagged two volunteers from the throngs. Byrum performed their ceremony and someone yelled out afterward, “You’re the first!”

They ended up sticking around for hours and watching other longtime couples exchange vows. “It was a really exciting day,” DeJong says.

In the five years since then, the couple moved to Saugatuck, known as an island of LGBTQ paradise in the sea of traditionally conservative West Michigan (the city also, not coincidentally, is home to the Art Institute of Chicago’s residency program). 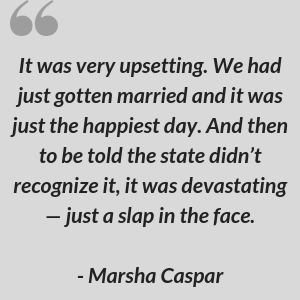 Caspar has since retired as a project manager from Consumers Energy, but not before she founded the Pride Alliance at work.

They also had to fight to have their union recognized. Both Schuette and Snyder initially said the more than 300 same-sex marriages performed on March 22, 2014, weren’t legal.

“It was very upsetting,” Caspar recalls. “We had just gotten married and it was just the happiest day. And then to be told the state didn’t recognize it, it was devastating — just a slap in the face.”

So the couple became the lead plaintiffs in an Americans for Civil Liberties Union (ACLU) case, Caspar v. Snyder. DeJong, who holds a Ph.D in kinesiology, has her own consulting business and wanted to join her wife’s workplace health insurance plan. But she was told she couldn’t since the state didn’t consider them legally married. Eventually, they won.

The commission agreed — but once again, Schuette argued against basic rights for the LGBTQ community. He lost his gubernatorial bid that year by almost 10 points. Nessel, his successor, has not surprisingly indicated she believes the commission made the right call.

“We know that with pressure, things can happen,” DeJong says.

The story of how the Bissell-Maynards came to be has a familiar beginning.

Joe Bissell also spotted online that Byrum’s office would open that Saturday in 2014. He says he was “aware that there was probably a fleeting chance” for he and his partner of almost 15 years, Justin Maynard, to finally get married.

“It was really, extremely spur-of-the-moment,” recalls Bissell, who runs a handyman business. “It was not something we discussed at all ahead of time.”

But Maynard was already at work as a nurse manager at Sparrow Health System. Bissell called him up and suggested they head down to Mason, but he recalls his partner was reticent to leave his shift.

“I remember telling him, ‘I feel like this is a proposal and you’re turning me down,’” Bissell laughs.

The Lansing couple did end up racing down to the clerk’s office, along with Bissell’s sister and a live-in foreign exchange student who served as their witnesses. Byrum performed the ceremony while national TV cameras were rolling.

“We were already married in our minds, but it was pretty awesome,” Bissell says.

Maynard’s mother, who lives in Colorado, caught the whole thing on CNN. When he strolled back into work after lunch, his Sparrow colleagues all knew where he had been from watching the news.

They took each other’s last names and both go by “Bissell-Maynard” now. When they found out the state initially wouldn’t recognize their marriage, Joe Bissell-Maynard, now 38, says they weren’t nervous, because they were confident their union was legal.

“But we were pissed off,” he says. “For them to put us through that — it was just torturing us.”

Their union quickly ended up leading them down an unexpected path. They weren’t planning to start a family, but a friend asked them to adopt her child — and because their marriage was eventually recognized, they could legally do so in Michigan.

That story is pretty eventful, too.

Their daughter just happened to be born on June 26, 2015. So the Bissell-Maynards were literally watching the U.S. Supreme Court decision as the doctor told them, “It’s a girl!”

She’s now 3 ½ and the couple has been together almost 20 years.

Back on March 21, 2014, Ingham County Clerk Barb Byrum was a little more than a year into her job.

Earlier that week, she had received a letter from then-Attorney General Bill Schuette that she says was meant to “bully and scare county clerks into not issuing marriage licenses.”

After Judge Bernard Friedman’s decision, Byrum initially believed wouldn’t be able to open her office on Saturday, because she never had before. But she ended up recruiting staff and started one of the most memorable days of her career.

Byrum says that having “the courage to open — that had been started way before I even ran for the House.” That was back in 2006, when the Democrat won a mostly rural swing seat held by her mother, now-Michigan State University Board of Trustees Chair Dianne Byrum.

“People had inserted themselves in my life to educate me and to bring me to the point where I was comfortable and I found myself that morning,” the Ingham County clerk says.

“I think those … three gentlemen, they’re the ones that really gave me the courage to open. I think they took turns calling me all that night,” she recalls. “And Nancy and those three helped me understand the world around me better. And I think if it wasn’t for them living their true lives and sharing their life experience with me, I might not have had the courage.” 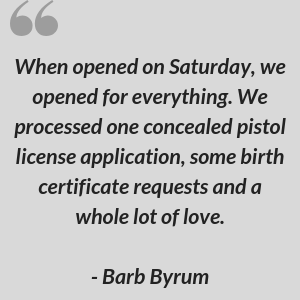 Byrum also knew that the clock was ticking. The Appeals Court was likely to issue a stay over the weekend. And even if it didn’t, she says, the “thought of making these families wait another couple days, that was just atrocious to me.”

So Byrum opened her office — and not just for marriage licenses.

“When opened on Saturday, we opened for everything,” she recalls. “… We processed one concealed pistol license application, some birth certificate requests and a whole lot of love.”

She ended up performing the ceremony for DeJong and Caspar — one of 30 she personally presided over that day. Triplett was there, too, as well as a few ministers who were eager to marry couples. In total, 57 couples were married at Byrum’s office in a five-hour period.

“We had people just show up,” Byrum recalls. “There were two individuals who showed up and handed out flowers to newlyweds. To this day, I don’t know who they were.”

In the middle of the hustle and bustle, Byrum’s husband dropped by with their two sons, then ages 4 and 6. She wouldn’t have had it any other way.

“I didn’t realize then, but looking back, weeks later, I thought, ‘Yeah. My kids are going to understand that marriage is between two loving people,’” she smiles.

But Byrum notes the fight for LGBTQ rights in Michigan is far from over.

Throughout it all, she’s kept in touch with many of the couples she married that day.

“Since that time, those families have had children. And one of my families, one of them passed away,” Byrum says. “They’ve moved. … They’ve done everything that every family does. 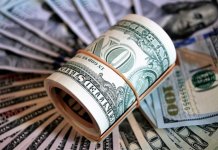 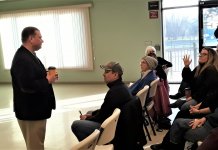