Gov. Gretchen Whitmer’s gas tax proposal to fix the roads — which would make Michigan the nation’s highest fuel tax state — is a tough sell for Republicans.

Whitmer said the 45-cent increase phased in over a year is the “smartest” way to raise the the roughly $2.5 billion experts say is necessary to bring Michigan’s roads up to snuff.

But GOP lawmakers in both the state House and Senate are already coming out in opposition or expressing serious concerns with her plan. Democrats are meanwhile staying largely silent on the issue.

Whitmer’s primary campaign pledge was to “fix the damn roads.” She acknowledged during her Tuesday budget presentation that the tax hike is tough to swallow, but argued it is the best option.

“This isn’t easy. This isn’t fun. But this is 40 years of disinvestment in the state of Michigan,” Whitmer said at a press conference following her budget presentation to the Legislature.

Overhauling the Michigan’s unique auto insurance no-fault law is a top priority for Republicans, but it was not part of Whitmer’s budget proposal, angering some Republicans. Budgets usually only encompass policy proposals that involve state spending, cuts or taxes.

Chatfield, Hernandez, Senate Appropriations Chairman Jim Stamas (R-Midland) and other GOP lawmakers also argued the state should first look at ensuring that all money that is meant to go to roads is actually being spent on that.

“I’ve said it before and I’ll say it again, we will always have a road funding problem in Michigan until every penny we pay in taxes at the pump is devoted to fix the roads,” Chatfield said in a statement. “The people of this state already said no to a reckless $2 billion tax hike not that long ago.”

Chatfield and other Republicans are referring to Proposal 1, a 2015 ballot proposal backed by GOP former Gov. Rick Snyder that would have raised $2 billion by increasing the sales tax, gas tax and vehicle registration fees. Voters rejected the plan.

Later in 2015, the GOP-led Legislature passed a scaled-back plan raising the gas tax that will generate $1.2 billion annually for roads by 2021. Chatfield voted “yes.” Some Republicans have said they should have been told by experts that wouldn’t be enough to solve the problem.

“We can’t continue to gloss over the long-term structural problem, while asking families, workers and seniors who are already living paycheck to paycheck to pay even more,” Chatfield said.

A report released Monday by the Detroit-based group Business Leaders for Michigan notes that deteriorating roads cost drivers an additional $686 every year in various costs and fees, as the Michigan Advance previously reported.

Whitmer said that fewer repair bills and her proposed increase to the Earned Income Tax Credit (EITC) for low-income workers will offset the extra $23 a month her administration projects many drivers will pay per month if the gas tax increase is enacted.

Hernandez, who will have a key role in budget talks as House Appropriations Committee chair, said he’s against the gas tax hike.

“Tax increases aren’t solutions. Unfortunately, what we heard from the governor are plans to tax and spend — not real solutions for fixing our roads, improving our schools or continuing Michigan’s economic comeback,” Hernandez said in a statement. “Coming out of the gate by proposing a 45-cent per gallon tax increase starts the conversation on the wrong foot.”

“Whether it’s the 45 cents or something else, I think that we need to first look at what’s in the budget, as Majority Leader Shirkey has spoken about. Then we can talk about where we go for the additional revenue,” Stamas told reporters after Whitmer’s presentation.

Shirkey was the first Republican leader to publicly acknowledge that a serious road fix may require new revenue, as the Advance previously reported. His office did not offer a statement on Whitmer’s gas tax plan on Tuesday.

“It’d be detrimental on so many levels to working families,” Miller said. “But again, I’ll admit that our roads do need funded.”

Miller acknowledged that many say the 2015 road plan, passed under Snyder, wasn’t enough to fix the roads. Miller supported the funding package then, but said he got his “head chewed off” by constituents for supporting a tax increase.

“That’s why 45 cents, I oppose right away. It’s too much,” he said. “Phasing it in over one year, three six month intervals — that’s even too much. But we’ll see. We have to still talk about it. It doesn’t mean we do nothing.”

For many Republicans, Whitmer’s fuel tax hike is simply a nonstarter.

“That’s not something I support. I mean … we already have the highest-in-the-nation auto insurance rates,” said Sen. Tom Barrett (R-Potterville). “So driving in Michigan is already unaffordable for many. And we wanna make it more unaffordable? That doesn’t make any sense to me.”

“I’m a no,” said Sen. Aric Nesbitt (R-Lawton). “I think the first thing we need to do is 100 percent of the gas taxes collected … need to actually go to roads and bridges.

“But all I heard today was more ways to tax and spend the residents here in Michigan,” Nesbitt added.

Many may need time to consider the potential impact on Michigan families, said Samantha Hart, spokeswoman for the House Democratic caucus, although most agree that the 2015 road plan “isn’t cutting it,” she said.

“The governor’s plan is starting the conversation. It’s important, I think, that we don’t take anything off the table until we start negotiating,” Hart said. “And I think it’s fair for folks to take a few minutes … to fully evaluate a plan that could impact Michigan families.”

Rep. Julie Brixie (D-Meridian Twp.) was one of the few Democrats who directly addressed the road tax proposal, calling it “very refreshing to see … a plan that would actually fix our roads,” in a statement.

Others largely did not address the issue.

“The cost of an unexpected auto repair because of Michigan’s terrible roads is something Michiganders and the working families of Metro Detroit have suffered through for too long. I look at the governor’s proposal as a starting point to a serious discussion on road funding. I want to look at all options, including potential savings within the department, before I commit to anything.”

“Michigan needs to invest in itself, and I applaud Governor Whitmer for her commitment to our cities, our students, our health and our prosperity. Michigan’s government has let too many of its residents down time and time again by not paying close attention to their needs on issues so vital to life and the well-being of our families as safe and affordable water, the safety of our neighborhoods, and the education of our youngest children.”

“Our hardworking families have waited for a budget that will give us the opportunity to clean up our drinking water, make sure every child has access to a world-class education, and create good-paying jobs they can rely on now and in the future. Today’s proposal is a first step in the budget process. I look forward to taking a closer look at Gov. Whitmer’s proposal, hearing from the people of our district and working with my colleagues to finalize a budget that looks out for the best interests of all Michiganders.”

“There are too many Detroit families who don’t have access to government services and simple life necessities because of systematic disinvestment by previous administrations, but Gov. Whitmer has made it clear she hasn’t forgotten them with her commitment to investing in Double-Up Food Bucks, our foster care system, and the Department of Health and Human Services. These actions will go a long way to helping those who need it most.”

“For the last decade, we have underfunded Michigan schools. As a teacher who spent 19 years in the classroom, I know firsthand the impact of underfunding our kids’ education. For too many years, we have had a cookie-cutter approach to school funding. Real investment in education will provide students with world-class K-12 programs, affordable options for college or access to career and technical training. This is an important step to restore Michigan as an educational leader.” 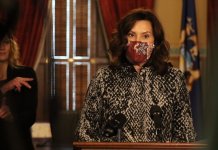 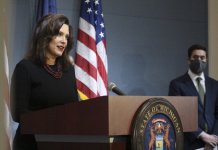 Few show up for right-wing demonstration at Michigan Capitol amid strong...

Few show up for right-wing demonstration at Michigan Capitol amid strong...