Solar power is growing in Michigan, according to a new report from a Washington, D.C.-based nonprofit that advocates for more solar-powered electricity.

Michigan supported 4,169 solar jobs in 2018, about a 1-percent uptick from 2017, according to a new report from the Solar Foundation. The nonprofit tracks the annual number of jobs supported by solar generation across the country.

While it may not seem like much, the increase is “a big success story in Michigan,” said John Freeman, executive director of the Great Lakes Renewable Energy Association.

“It is a slow growth, but you’re starting from scratch,” Freeman said. “We have seen solar and renewable energy grow fairly dramatically in Michigan, as well as around the country.”

A majority of Michigan’s solar-related jobs are in Oakland County, according to the report.

Although the Mitten State is cloudy compared to sunny Florida, California and Arizona, Michigan still scored 18th in the nation for most solar power jobs.

Maryland (16) and Pennsylvania (17) scored slightly higher than Michigan, while North Carolina (19) and Virginia (20) were just below.

Neighboring Ohio ranked seventh in the country, with nearly twice the number of solar jobs Michigan supports —  7,162, the report said.

The biggest reason why Michigan’s solar industry has grown slower than in some other states is because they incentivize renewable energy, Freeman said.

Experts say that solar power will become more attractive as the cost to produce renewable electricity goes down. At the same time, coal-powered electricity plants will become less viable due to dwindling reserves and more awareness of the negative health- and environmental impacts of burning coal.

DTE Energy has already invested in multiple solar projects in recent years, including the Lapeer Solar Park. The project was commissioned in 2017 and is the largest solar park east of the Mississippi River, with more than 200,000 panels, according to DTE.

“Absolutely, we think solar will continue to grow in Michigan,” said Frank Houston, a program manager for Bluegreen Alliance, which advocates for more renewable energy in Michigan.

“What will determine that is largely how we make sure there’s a level playing field for both individual … as well as the commercial sector,” Houston said. “Michigan remains a state that’s rich for more investment and expansion of renewables, and we definitely think solar is going to be a part of that going forward.” 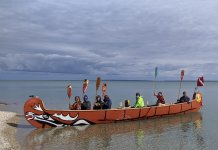 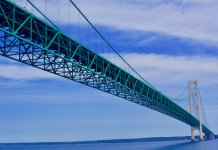 After Line 5 damage, legislation would make anchoring in Straits a felony