Whitmer signed her seventh executive order, which will create the Marijuana Regulatory Agency housed within the state’s Department of Licensing and Regulatory Affairs (LARA). It will be in charge of the state’s laws for both medical and recreational marijuana.

“This executive order will eliminate inefficiencies that have made it difficult to meet the needs of Michigan’s medical marijuana patients,” Whitmer said in a statement. “All elements of this Agency have been designed to serve and better protect Michigan residents, and I’m eager to have a unified effort across state departments to make sure this process runs effectively and efficiently.”

Once the order takes effect on April 30, the new agency will replace the existing Bureau of Marijuana Regulation and the Michigan Marihuana Licensing Board (MMLB), which had previously provided oversight of marijuana and handled licensing for businesses operating in the space. The latter was chaired by GOP former House Speaker Rick Johnson.

The MMLB has come under fire for acting “arbitrarily and capriciously” when deciding to issue or deny licenses.

“This is a game-changer,” VandenBerg told the Advance regarding Whitmer’s order, adding that the former licensing board would use “nebulous” terms to determine how licenses would be handed out.

VandenBerg told the Advance she’s not currently involved in any cannabis-related businesses, but is actively exploring opportunities. She believes Whitmer’s executive order will only make it easier for people to enter the industry.

“This is going to remove some serious extra bureaucracy,” said VandenBerg. “I just could not be more excited for everybody already applying or planning to apply.”

Whitmer will get to pick a new agency executive director, who will be subject to the advice and consent of the state Senate.

Whitmer’s move was praised by fellow Democrat, Attorney General Dana Nessel, who ran on a platform of marijuana legalization.

“I support Governor Whitmer’s executive order establishing the Marijuana Regulatory Agency,” Nessel said in a statement. “A dedicated state agency that can administer the functions and responsibilities under the medical and recreational (adult-use) marijuana statutes will create numerous efficiencies, including faster processing of marijuana applications, and better serve medical marijuana patients and the developing industry.”

The order also received accolades from other law enforcement officials in the state.

“As a sheriff, I appreciate Governor Whitmer’s leadership on this important issue,” said Kalamazoo County Sheriff Richard Fuller. “This executive order will help keep our communities safe by ensuring that enforcement of marijuana issues is performed efficiently, fairly and consistently.”

Michigan has faced something of a bumpy road as it explores how to best regulate the new industry, which has both medical and recreational aspects.

The state was facing a shortage of medical marijuana supply. So in January, the former licensing board temporarily granted retail provisioning centers the ability to source product from caregiver rather than just licensed growers.

The move, not surprisingly, was slammed by some growers, who, aside from likely losing some business, expressed concern that patients could wind up purchasing untested product.

VandenBerg said she believes Whitmer’s order sends a clear message that her administration wants the marijuana industry to be successful.

“My hope is that we can really streamline the process of these applications, VandenBerg said. “Having a professional group that deals with this industry, actually cares about this industry and actually wants this industry to be successful is just a game-changer.” 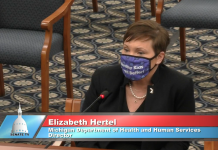 No vote on DHHS director, but 7 GOP senators urge rejection