Michigan’s lawmakers only have three options if they’re serious about “fixing the damn roads,” according to a new report by the nonpartisan policy think tank Citizens Research Council of Michigan (CRC).

The report released on Tuesday morning lays out those three choices: generating new tax revenues for roads; diverting existing state revenues to pay for road construction; or borrowing money upfront and pay it off over time.

“Each track presents its own set of advantages and obstacles,” the CRC report says.

Gov. Gretchen Whitmer — whose signature campaign issue was fixing the roads — said in her Feb. 12 State of the State speech that Michigan doesn’t need studies to tell us we needs more funding because “the evidence is impossible to ignore.”

CRC President Eric Lupher, however, said he believes the report comes at an important time.

“I think we’ve all come to accept that more money is needed, so the question is where is it going to come from,” Lupher told the Advance. “The Republican leadership has sort of acquiesced that new taxes are going to be needed. We’re just trying to narrow the conversation down so that we can talk in real terms about the options.”

To Lupher, further raising the gas tax seems like a likely outcome. He said that would be preferable to raising other taxes like vehicle registration fees because “paying that [gas] tax in little increments is easier” than writing a large check for your annual vehicle registration.

Similarly, a bipartisan group of former legislative leaders last month called for tripling the state’s gas tax over time to generate about $2.7 billion in new revenue for roads, in line with the recommendations of former Gov. Rick Snyder’s 21st Century Infrastructure Commission. The proposal has yet to generate any significant traction with current lawmakers.

Michigan currently has the sixth-highest gas tax in the country and 14th-highest vehicle registration fees, according to the CRC report and based on U.S. Census data.

The new CRC report notes that in 2021, the hike to the state’s gas tax signed by former Gov. Rick Snyder in 2015 will take full effect, generating an additional $1.2 billion annually.

But as the Advance has previously reported, it still won’t be nearly enough to adequately fund the state’s roads. By most estimates, Michigan needs an additional $2 billion a year to adequately fund roads — and the longer lawmakers wait, the more expensive it gets.

In Michigan, only a part of taxes paid at the pump goes toward roads. Legislative leaders like House Speaker Lee Chatfield (R-Levering), have called for untangling the state’s sales tax and gas tax, much of which gets diverted to pay for other priorities like education and funding local units of government.

The CRC report notes that if lawmakers exempt gas from the sales tax they could increase the fuel tax “without increasing prices at the pump.” The Legislature could then “backfill the School Aid Fund and to add to state revenue sharing funding with revenues from other taxes to make up for the revenue decline caused by the shrunken tax base.”

Doing so would free up about $900 million in revenue for roads, or about half of what is currently needed.

State Senate Majority Leader Mike Shirkey (R-Clarklake), on the other hand, this month hinted that he was open to the idea that new tax revenue would have to be part of any large road-funding package.

“I’ll go on the record here, all right: There’s no way we’re gonna fix this problem that’s been 50 years in the making without coming up with new revenue for infrastructure,” Shirkey said at a news conference after Whitmer’s State of the State address.

It’s unclear where that “new revenue” would come from. He later clarified that raising taxes would only come after exploring ways to cut costs and shift around state funding.

Whitmer has hinted that “bonding,” or borrowing against state bonds, could be a possibility if she and the Legislature can’t come to an agreement on a long-term road-funding plan.

The CRC report says that borrowing money to pay for roads does have an advantage, in that the state could get a large amount of money upfront and finish road projects much faster.

“While there are benefits, borrowing can hamstring the state long-term,” the CRC report says. “Without new revenues, increased borrowing will reduce the state’s ability to maintain road conditions in the long term. It also would export the costs of road improvement to future generations; while road conditions improve immediately, the construction costs are paid over two to three decades.”

The CRC report points to a unique road repair financing strategy used by the Michigan Department of Transportation (MDOT) during recent work on a stretch of I-75 through Oakland County.

MDOT entered into a so-called “Public-Private Partnership” with contractors, who take responsibility not only for the designing and building of the project, but also long-term maintenance. The report notes that the method allows for faster delivery and that contractors have additional skin in the game, ensuring a better design.

Still, the report highlights some risks with the strategy, most notably that payments to contractors are essentially their own kind of bond payment and carry a higher interest payment.

While road funding is likely to create some tension between a Democratic governor and Republican-led Legislature, the CRC report notes that coming to a solution sooner rather than later is critical.

More than three-quarters of state-controlled roads are considered in “good” or “fair” condition. That number is expected to fall to below 50 percent by 2025, according to the nonpartisan House Fiscal Agency and the state’s Transportation Asset Management Council and included in CRC’s report. Roads controlled by cities and counties are even worse.

Whitmer has been mostly quiet on specifics of any road funding proposal; those details will likely come out early next month when she unveils her first budget proposal.

But she’s also been clear that a deal is critical and stressed it needs to be comprehensive and substantial.

“It jeopardizes our edge in mobility. And limits our economic potential. Because no one will invest in a state that doesn’t invest in itself,” she said. “And let’s be clear: Incremental fund shifts, like we’ve seen in recent years — don’t fix the problem. They only slow our decline.” 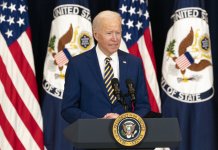