Fiat Chrysler Automotive (FCA) on Tuesday announced plans to invest $4.5 billion into manufacturing five plants in and around Detroit, which could result in up to 6,500 new jobs in the region, the automaker says.

The planned investments are contingent on negotiating land deals and incentives with the cities of Detroit, Sterling Heights, Warren and Dundee, as well as the state of Michigan, according to FCA.

The city of Detroit has 60 days to deliver on an agreement to acquire about 200 acres of land where FCA plans to convert existing facilities into a new assembly site that would employ 3,850 people.

“This is the way the city of Detroit fights unemployment and poverty,” Detroit Mayor Mike Duggan said.

Should the pieces come together, FCA says the planned investment will allow for continued growth for its sport utility vehicle (SUV) and truck brands, Jeep and Ram. Plans call for the “reborn” Mack Avenue Engine Complex to be just the second assembly plant in Detroit city limits, joining the company’s Jefferson North Assembly Plant.

FCA says it plans to invest $2.5 billion into the Detroit facilities.

“Three years ago, FCA set a course to grow our profitability based on the strength of the Jeep and Ram brands by realigning our U.S. manufacturing operations,” Mike Manley, FCA’s CEO said. “Today’s announcement represents the next step in that strategy.”

Manley added that the investment will allow the company to expand its range of electrified Jeep products and a next generation Jeep Grand Cherokee.

“It’s been a long time since we’ve since an investment this big and this transformative,” Whitmer said. “This is has enormous implications for our state.”

In a phone call with the Advance prior to the announcement, Whitmer said that she had hinted to President Donald Trump while at the White House over the weekend that Michigan would have positive job news coming this week, but declined to share further details with the president out of fear that he would share the news ahead of time.

“He was critically observing General Motors [for job cuts] and I had simply acknowledged that we were going to have some good news here in Michigan. And he asked, ‘What?’ and I said, ‘I’m not at liberty to discuss it,’” Whitmer told the Advance.

Estrada said the announcement was “great news for the members of the UAW, our represented suppliers and the communities that our members work in.

“At a time when the Detroit area and other communities are seeing auto plants without work and in jeopardy of closing while companies continue to ship vehicles into the US from Mexico, China, Korea and other countries it is exciting to see that we can work with FCA and secure good union jobs here in Michigan,” she said.

Several members of Michigan’s congressional delegation also shared their pleasure that FCA plans to invest in Michigan, particularly given that rival automaker General Motors has been reducing its manufacturing footprint in the state.

In a series of tweets, U.S. Rep. Debbie Dingell (D-Dearborn) said that FCA’s “investment decisions are an important part of keeping this country at the forefront of innovation and technology in transportation and mobility.”

Great news for Michigan from @FiatChrysler_NA today. I want to thank them to their commitment to production in the US. Their investment decisions are an important part of keeping this country at the forefront of innovation and technology in transportation and mobility. https://t.co/WAJ1hqrkWn

“Betting on Michigan’s best-in-class workforce is always a smart decision,” Stevens said in a statement. “I am thrilled to hear that FCA is investing in Michigan and creating thousands of new jobs in the process. Michigan is a global leader in technology and innovation in the auto industry and there is no better place for FCA’s investment in modernization and electrification.”

Report: BLM protests have not contributed to COVID-19 spread 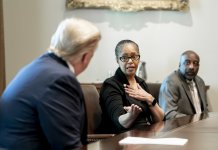 Dan Kildee is ‘only moving up the ladder.’ So what’s next?