Gov. Gretchen Whitmer told the Advance on Tuesday morning that the “historic Detroit jobs announcement” she’ll be at in an hour is something that President Donald Trump mentioned in his remarks to governors gathered at the White House Monday.

But the thing is, the president doesn’t know what that announcement is.

Whitmer also declined to say in the telephone interview what the project is, but she, Detroit Mayor Mike Duggan and Wayne County Executive Warren Evans are slated to reveal it at noon at the mayor’s office.

So here’s what happened, Whitmer said. She was at the White House over the weekend for the Governors’ Ball and was seated right next to Trump. So they had plenty of time to talk about the Great Lakes, tariffs, General Motors, economic development and more.

“He was critically observing General Motors [for job cuts] and I had simply acknowledged that we were going to have some good news here in Michigan. And he asked, ‘What?’ and I said, ‘I’m not at liberty to discuss it,'” Whitmer recalled said with a laugh.

Then at the Monday breakfast meeting titled the “2019 White House Business Session with Our Nation’s Governors,” Trump mentioned there will be some “very good news coming up soon” in Michigan.

At the state dinner, Trump complimented the group of governors.

“This has been a — really, a great couple of days. We’ve had a lot of fun together. And it’s been, you know, very special,” he said. “We’ve gotten to know each other. We’ve gotten to like each other, in almost all cases. Let’s see — one or two cases. Every case, I would say. Every single case.”

In the meeting with governors, Trump also slammed NAFTA and its impact on states like Michigan.

“I’ve long said that NAFTA is the worst trade deal that anyone has ever signed … this deal will bring it back,” Trump said, adding that his trade deal would open Canada and Mexico to farmers.

The Advance will have more from the interview in a future report. 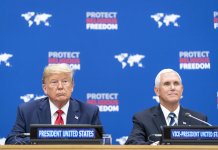 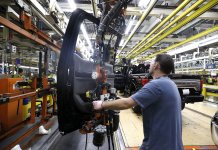 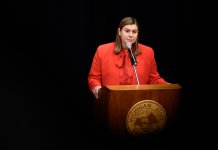