Joe Schwarz, a moderate Republican who represented Michigan’s 7th District from 2005 until 2007, was among 25 former Republican lawmakers signing an open letter asking current GOP representatives to “put the country and its Constitution above everything, including party politics or loyalty to a president.”

The letter comes as Democratic leadership in the U.S. House plans to vote Tuesday on a resolution that would terminate Trump’s emergency declaration, which he intends to use to circumvent Congress to secure billions of dollars to fund a wall along the southern U.S. border.

“If Congress lets him get away with this, it’s a sellout,” Schwarz told the Michigan Advance Monday in an interview.

Schwarz is a surgeon who served in the Vietnam War and later joined the CIA. A former Battle Creek mayor and state senator, he most recently was a member of Gov. Gretchen Whitmer’s transition team.

The letter warns current lawmakers that the president is taking the power of the purse out of their hands: “If you allow a president to ignore Congress, it will be not your authority but that of your constituents that is deprived of the protections of true representative government.”

It also cautions that Trump’s move would set a troubling precedent. “To you, we ask this question: what will you do when a president of another party uses the precedent you are establishing to impose policies to which you are unalterably opposed?”

Schwarz didn’t write the letter, but he signed on because he agreed that Trump’s declaration is unconstitutional.

“To think that another president under similar circumstances wouldn’t try to do the same thing if this president gets away with it is not logical,” he said.

U.S. Rep. Justin Amash of Cascade Township is the only GOP co-sponsor of the resolution, as the Advance reported. All seven Democratic members of Michigan’s U.S. House delegation are co-sponsors.

Amash wrote on Twitter Saturday, “The same congressional Republicans who joined me in blasting Pres. Obama’s executive overreach now cry out for a king to usurp legislative powers. If your faithfulness to the Constitution depends on which party controls the White House, then you are not faithful to it.”

Other House Republicans may vote in favor of the resolution during the floor vote. Schwarz said he wouldn’t be surprised if another Michigan Republican, U.S. Rep. Fred Upton of St. Joseph, voted to block Trump’s declaration.

But even if support is scant among House Republicans, the resolution is expected to pass the Democratic-controlled chamber. It would then be sent to the GOP-led Senate, where the outcome is less clear. Several Republican senators have suggested they’d vote to oppose the president’s move.

U.S. Senate Majority Leader Mitch McConnell would be required under the National Emergencies Act to hold a vote on the House resolution within 18 days of its passage.

Trump has said he’d veto the resolution even if it makes it to his desk. Overriding that veto would require the votes of two-thirds of both chambers — a steep climb, particularly in the GOP-controlled Senate.

Trump’s critics are trying to stop him in court, too. Sixteen states, including Michigan, have filed a lawsuit against the emergency declaration.

Schwarz said he hopes Republican lawmakers take the letter to heart, although he acknowledged that they could embolden primary challengers if they oppose the president.

“I lost my seat in a primary because I stuck to my principles,” said the one-term congressman, who was defeated by current U.S. Rep. Tim Walberg (R-Tipton). “After all these years, I don’t regret one moment having stuck to my principles. I would hope other members feel this way, as well.” 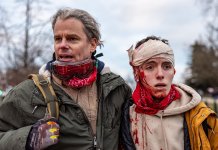 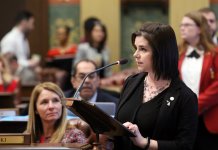