Left-leaning Michigan activists met in a Lansing church basement on Monday to show their support for Presidents Day protests planned across the nation.

The action was billed on social media as a protest, but ended up being a press conference where some 200 activists showed up.

Many were disappointed there was no rally, said Mark Brown, a community organizer who helped put the event together along with groups including Indivisible-District 8 and Action of Greater Lansing.

On Friday, President Donald Trump declared a national emergency at the U.S.-Mexico border to direct more money to his border wall project. Hundreds of events sponsored by MoveOn.org — mostly rallies — were planned across the country in protest. In Michigan, events were scheduled in Howell, Ann Arbor, Ferndale, Ypsilanti and Wyoming.

Lansing organizers decided to hold a press conference instead due to the cold weather, Brown said.

Brown said he thinks the border wall is “rooted in xenophobia, racism, eugenics — everything.”

He continued, “It’s about those who feel superior and [are] taking steps to be oppressive against those who they feel are inferior. And these are things that we have a long ways to heal from. But it’s important that we’re having the conversation.”

“I do believe the border wall is necessary,” Williamson said. “I do believe that 95 percent of border patrol agents do say that walls work, and I support the president fully and wholeheartedly. I do believe president Trump should have received the money a lot sooner to build the wall. I think it would help with a lot of human trafficking and drug smuggling coming into this country, and help keep illegal immigrants out of America.”

In Trump’s emergency proclamation, he called the U.S.-Mexico border “a major entry point for criminals, gang members and illicit narcotics” and is the site of a “humanitarian crisis” that “threatens core national security interests and constitutes a national emergency.”

Trump’s declaration came after he failed secure congressional support for more than $5 billion he wanted for border security in a broader spending bill that funds a variety of federal agencies, as the Michigan Advance previously reported.

There’s a lot of federal money “but on the wall, they skimped,” Trump said in an Associated Press video of a White House Rose Garden press conference. 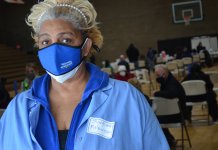