I’m writing this from a hospital room in the pediatric intensive care unit.

One of my sweet little nine-month-old daughters (yes, twins!) is dealing with respiratory syncytial virus (RSV), and is sleeping a few feet away with a feeding tube down her throat and artificial oxygen being steadily pumped into her nose. She looks a little bit like E.T. when he’s sick, which is my #joketocope.

I’m grateful for the care we’ve been receiving and for her steady recovery. My gratitude for having health care is not far behind.

Amidst all the chaos and worry that comes from being a layperson in a medical crisis — especially with a baby involved — there’s always the needling thought of: “How much is this going to cost?” I think that question is stronger for parents … and stronger, still, for parents of multiples.

The answer for us, thankfully, is not much. We have health insurance and almost all the costs associated with my daughter’s care should be covered.

But for a family just like us, with a baby just as sick as ours, the exact same care would easily cost tens of thousands of dollars without insurance. Serious medical costs are often higher than the average annual salary and would bankrupt most families without insurance. What we earn for a year’s worth of work can disappear for a few nights in a hospital.

But our own little personal health scare is just the cherry on top for a big week for health care last week.

On Feb. 7, we lost a giant — not just in the worlds of Michigan politics or health policy — but in the world. After a long and fruitful life, with almost two-thirds of it spent serving in Congress — John Dingell passed away.

As the news sites and my political friends’ Facebook feeds lit up with memories of his general public service and sharp wit, most noted the Michigan congressman’s work on health care and his belief that it should be afforded to all people, whether or not they could afford it.

In his own spot-on parting shot in the Washington Post, he talked about the fight to create Medicare so health costs would not continue to bankrupt seniors. In carrying on the work of his father and namesake, Dingell introduced his own national health insurance bill at the start of every Congress. And he was proudly seated next to President Barack Obama when he signed the Affordable Care Act into law.

My own brush with Dingell’s greatness was health care-related, too. When I was working for the state Senate Democratic Caucus under the leadership of now-Gov. Gretchen Whitmer, we made a big, bipartisan push in 2013 to expand Medicaid in Michigan — a strong and sound policy that was getting entangled in the politics of the ACA.

During what was intended to be a procedural Senate session day in the summer, the Senate chamber was largely stripped of its pomp and circumstance, as well as its desks and carpet during some remodeling.

Whitmer, who was Senate minority leader, and caucus members stood on the bare concrete just on the other side of yellow caution tape cordoning off the floor and called for action on the Healthy Michigan Plan.

With us on that day was the Dean of Congress. Dingell stressed the need to improve health care access for Michiganders with low incomes and shook hands with political fangirls and fanboys like me.

What become the Healthy Michigan Plan ultimately passed later that summer in bipartisan fashion. It has been a resounding success for 680,000 Michigan residents and their families and the state’s health industry and economy ever since.

But unfortunately, some of the very lawmakers who helped pass the program in 2013 decided to hamper it in 2018 by adding work requirements and complicated bureaucracy.

Manatt, a national consulting firm, released a new report on Feb. 6 showing that “an estimated 61,000 to 183,000 people — between 9 and 27 percent of the State’s Medicaid expansion population — will lose Medicaid coverage in Michigan over a one-year period.”

Whitmer issued a letter to the Centers on Medicare and Medicaid Services approving the waiver request for Healthy Michigan Plan work requirements, but she said she intends to work with Republican-led Legislature to change them.

The Michigan League for Public Policy has always stood up for health care for all residents, especially those with lower incomes. We fought these Healthy Michigan Plan work requirements tooth and nail and have made protecting Healthy Michigan and Medicaid an important part of our Owner’s Manual for Michigan policy agenda and our priorities for Michigan’s 2020 budget.

The governor also raised the need to protect the Healthy Michigan Plan in her State of the State address. As I drove back from the Capitol to the hospital after her speech, I tried to remember what Republican legislators’ reaction to that line was.

I tried to understand why any elected official would be working to make it harder for people to get health care, not easier. And I wondered if any of them would feel differently if their baby was in the ICU, and health care was the difference between quality care and peace of mind and financial ruin. 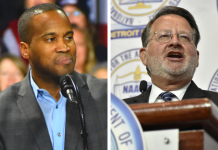 Alex Rossman: My view from the ICU: Everyone deserves quality health care