State Senate Majority Leader Mike Shirkey (R-Clarklake) may agree with Gov. Gretchen Whitmer’s administration that a major fix to state roads will likely have to include new revenue, a spokeswoman said Wednesday.

But Shirkey, Whitmer and House Speaker Lee Chatfield (R-Levering) first need to agree on how much money it’s going to cost to fix the roads, said the majority leader’s spokeswoman, Amber McCann.

“Once we agree on the total needed, a comprehensive plan would likely have to include new revenue as a component,” said McCann, a top aide for Shirkey, when asked about comments he made earlier Wednesday.

The clarification came after Shirkey and Chatfield criticized Whitmer during a press conference they called following her first State of the State address on Tuesday night.

The Republicans declined to do an official GOP response to be aired on television after the Democratic governor’s speech, instead opting to hold their own event Wednesday morning in the speaker’s Capitol office.

The leaders also jabbed the governor for failing to outline plans to lower auto insurance rates and fix Michigan roads.

But in a departure from previous rhetoric, Shirkey acknowledged that a major road system fix requires “new revenue.”

He said he’d like to first consider ways to cut costs and shift state funding before imposing a tax hike, adding that he was not ready to increase fees at this time.

But later at the event, Shirkey added, “I’ll go on the record here, all right: There’s no way we’re gonna fix this problem that’s been 50 years in the making without coming up with new revenue for infrastructure.”

McCann declined to specify where that “new revenue” might come from, but said, “It is likely a component of any long-term plan.”

Both Republicans agreed that Whitmer “missed opportunities” to talk about GOP priorities and providing details on her plans.

But Shirkey, while slamming Whitmer for falling short on details, declined to offer any of his own on roads “because we haven’t had the best ideas surface yet. We need some time to do that.”

A key part of the GOP legislative agenda is overhauling the state’s auto no-fault system to create tiered auto insurance options that could cost less.

There was a last-minute push in the House to create such tiered options during the Lame Duck legislative session, but it failed to garner enough support.

Chatfield said Wednesday that lowering auto insurance rates is “the single largest issue that’s facing our state.” Both Republican leaders chided the governor for not providing more details on solutions she may have for the many political problems she identified during her speech.

They also questioned the specter of a tax hike to pay for the annual $1.5 billion Whitmer’s administration has called for to fix state roads.

Chatfield applauded the governor “for keeping a consistent message” and working with Republicans, but criticized her for not offering a concrete plan.

“It is important to note that the campaign trail has ended, and now it’s time to govern,” he said. “And it’s important that when you govern, you need specificity and you need details. And now’s the time to begin negotiating.”

During a wide-ranging speech on Tuesday night, Whitmer touched on her campaign promise to “fix the damn roads,” improve the state’s education system and address PFAS contamination. She said there has been severe underinvestment in K-12 education for decades and slammed Republicans for “phony fixes” that fill potholes “instead of rebuilding roads.”

The governor did not offer any details on how she plans to pay for fixing the roads, but Michigan Department of Transportation Director Paul Ajegba — a Whitmer appointee — has said the state will need to “grow the pie” rather than simply shift money before roads further deteriorate.

Chatfield and Shirkey defended the 2015 roads plan signed by GOP former Gov. Rick Snyder that pledged $600 million more a year to state roadways by raising the gas tax and vehicle registration fees. They agreed that Whitmer and the Legislature should first look to savings and potential cuts to other areas of the budget before they consider raising taxes.

Shirkey called the 2015 vote “a very good start on a very tough topic” that’s been “four or five decades” in the making.

“And for us to be able to do that in 2015 and kickstart the process — nobody should assume we’re gonna solve this problem in one fell swoop,” he said. “It’s too big. And doing it piecemeal, I think, was the right way to do it.”

He added that by the end of next year, Michigan will have spent $1.2 billion more on roads.

“That’s not insignificant,” he said.

Chatfield echoed that sentiment and called on Whitmer to offer more details.

“It’s much easier to poison a well than to dig one,” he said. “Meaning, it’s easy to criticize a plan when you don’t have one yourself. We have to look at how we are raising that revenue in the first place …  instead of just going back to the taxpayers and their pockets.” 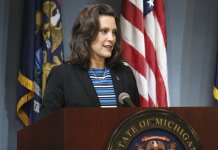