“The net effect of these amendments was the elimination of the ability for many employees to earn paid sick time, and substantial and sweeping changes to the minimum wage law proposed by initiative petition,” Chang wrote. “These laws are set to take effect in March 2019, and many questions have been raised regarding the constitutionality of the action taken by the Legislature in enacting and amending the laws.”

Schuette, a Republican, contradicted a 1964 opinion from Democratic Attorney General Frank Kelley, who said the Legislature couldn’t adopt and amend a citizen-backed initiative in the same session. Indeed, the Legislature has never done so. Nessel is also a Democrat.

Nessel spokeswoman Kelly Rossman-McKinney wrote in an email to the Advance that Nessel “will carefully evaluate this request and encourage all interested parties to submit written comments on this issue … no later than March 6, 2019, so that we may include them in our considerations.”

Both of the citizen-initiated measures went before the Legislature in September. Each initiative vastly exceeded the thresholds of signatures from citizens required to get on the ballot in last November’s election.

Rather than allow the minimum wage and sick leave measures to go to the ballot, the GOP-led Legislature instead adopted them. Several Democratic lawmakers, including Chang, voted in favor, under the mistaken belief that their Republican counterparts would not meddle with the measures after passage, as the Advance previously reported.

But after the election, Republicans introduced bills to gut the measures.

Both chambers, dominated by Republicans, approved the new legislation in Lame Duck shortly after Schuette issued an opinion saying they were in the clear.

By adopting and amending the citizen initiatives, Republicans prevented the state’s mandated minimum wage from hitting $12 in 2022, instead pushing it back to 2030. The watered-down paid sick time legislation exempts employers with under 50 employees from having to offer the benefit and caps the amount of paid sick time an employee can earn at 40 hours, down from 72 hours.

“What the Republican-controlled Michigan Legislature did to the minimum wage and paid sick leave citizen-led initiatives subverted the will of nearly 400,000 Michigan citizens who signed the petitions and is possibly unconstitutional,” Chang said in a statement on Wednesday morning.

The minimum wage and paid sick time ballot initiatives, along with several others that passed at the voting booth, contributed to another piece of controversial Lame Duck legislation.

Snyder ultimately signed a bill making it more difficult to conduct citizen-driven initiatives by mandating that no more than 15 percent of signatures can come from a single congressional district.

Nessel is reviewing that law, as well, at the request of Secretary of State Jocelyn Benson, a Democrat. Republicans slammed the move. 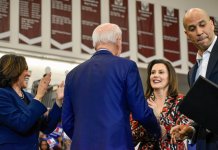