Newly inaugurated Gov. Gretchen Whitmer says she has no plans to land on the 2020 ticket. In fact, she was pretty emphatic that she didn’t want to run for president or vice president when I interviewed her in December before she took office.

Something is definitely happening here in Michigan. On Saturday, 2,500 people crammed into the Grand Rapids Public Museum to see her.

This wasn’t a November campaign rally. There was no superstar national headliner like former President Obama. It was just a simple meet-and-greet with the guv during a cold snap in West Michigan.

That came after a similar “Winter Warm-Up” event at the Flint farmers market earlier this month when Whitmer actually canceled a planned speech and program because so many people just wanted to talk to and get their picture taken with her.

“I’m so excited for the future,” attendee Diane Labree said.

The turnout even surprised U.S. Rep. Dan Kildee (D-Flint), who hails from a political family and has been to one or two things like this in his life.

Whitmer’s skills are starting to get noticed on the national scene, with Washington Post reporter Dave Weigel saying she had “arguably the strongest social media game of any 2018 Dem campaign.” CNN’s Eric Bradner noted on inauguration day to “keep an eye” on Whitmer, ending with #veepstakes.

And Matt Yglesias of Vox argued that Democrats’ rebuttal to President Trump’s State of the Union address (providing it happens) “should just be Gretchen Whitmer saying ‘fix the damn roads’ for five minutes.”

I’ve been covering leaders across the Midwest for a couple decades now and I’m with Kildee. People tend not to get terribly excited about meeting governors outside of campaign season (and in many cases, even during that period).

Former Gov. Rick Snyder won his first election in 2010 by almost 20 points, but it’s impossible to imagine folks lining around the block just to shake hands with the guy from the “One Tough Nerd” commercials.

That’s why he always did small town halls where he could uncomfortably lecture people about corporate taxes with PowerPoint presentations. To his credit, Snyder knew his limitations, even if fanboys like Detroit News editorial page Editor Nolan Finley didn’t and wrote hagiographic columns about how he totally should run for president.

In politics, you either have that spark that inspires people or you don’t.

Whitmer’s got it. National interest in the new governor has been a slow burn, however, as she was overshadowed in coverage during the Democratic primary.

Abdul El-Sayed was supposed to be the next big thing for the Bernie Sanders crowd. National media, from Politico to the Nation, flocked to Michigan and showered him with glossy profiles, while friendly outlets like the Intercept and Splinter went to work hammering Whitmer and the other Democrat in the race, Shri Thanedar.

But Whitmer just put in the work. Her “fix the damn roads” message was connecting with actual voters, even if some super-savvy East Coast journalists I dealt with thought her Michigan accent was corny and scoffed she was just a Midwest Hillary Clinton.

As it turned out, Whitmer easily won an outright majority on Aug. 7. She went on to trounce Republican Bill Schuette three months later, making her the top vote-getter in the state and prompting Weigel to declare Whitmer the Democratic star of the night.

But bitterness about the gubernatorial primary remains among the new self-proclaimed “true progressive” set. So you can expect some less-than-ethical folks to take snippets of this column out of context and snigger because, duh, they’d never vote for someone like their mom for president. And no, they’re totally not sexist, it’s just that almost no women meet their purity standard, OK?

There’s no doubt that Michigan will play a key role in 2020, as it’s almost impossible for Trump to cobble together enough electoral votes to win without us. And Democrats will be tempted to put a Midwesterner on the ticket, especially if the presidential nominee hails from one of the coasts.

In the end, I sincerely doubt Whitmer will leave the Mitten for the national stage after covering her for more than a dozen years. She’s a lifelong Michigander who passed up congressional runs because she knew state government was where she wanted to be.

But Gretchen Whitmer will be a force in 2020 in one way or another. Those who underestimate her do so at their peril. If you didn’t learn that in 2018, well, you didn’t really learn anything. 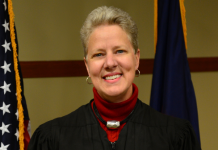