With 10 million people, a full-time Legislature and our status as a 2020 swing state, Michigan is frequently in the glare of the national spotlight.

Here’s a roundup of some national coverage of the Mitten State that you may have missed over the last week:

There’s been a flurry of stories former Vice President Joe Biden, as speculation grows that he could join an already crowded Democratic field for president in 2020.

“… Mr. Biden was not there to denounce Mr. Upton. Instead, he was collecting $200,000 from the Economic Club of Southwestern Michigan to address a Republican-leaning audience, according to a speaking contract obtained by The New York Times and interviews with organizers. The group, a business-minded civic organization, is supported in part by an Upton family foundation.

“Mr. Biden stunned Democrats and elated Republicans by praising Mr. Upton while the lawmaker looked on from the audience. Alluding to Mr. Upton’s support for a landmark medical-research law, Mr. Biden called him a champion in the fight against cancer — and “one of the finest guys I’ve ever worked with.”

“Mr. Biden’s remarks, coming amid a wide-ranging discourse on American politics, quickly appeared in Republican advertising. The local Democratic Party pleaded with Mr. Biden to repair what it saw as a damaging error, to no avail. On Nov. 6, Mr. Upton defeated his Democratic challenger by four and a half percentage points.”

Burns goes on to note that Biden’s chumminess with Republicans may be his Achilles’ heel if he runs next year in a party with a base itching for a fight against President Trump and the GOP.

The Washington Post also uses Michigan for the lede of its story, “Trump voters now blame him for the government shutdown.” The Post traveled to the other side of the state, Macomb County, which has fascinated national reporters for decades, first as the home of “Reagan Democrats” and now as the embodiment of Trumpism.

Here’s the scene Matt Viser of the Post sets in a Walmart: 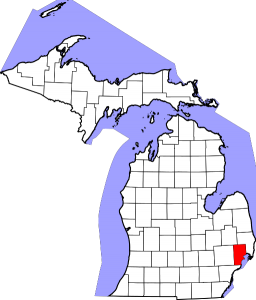 “Two years ago, Jeff Daudert was fed up with politics. He wanted to shake up the status quo. He didn’t mind sending a message to the establishment — and, frankly, he liked the idea of a disruptive president.

“But the 49-year-old retired Navy reservist has had some second thoughts.

“’What the [expletive] were we thinking?’ he asked the other night inside a Walmart here, in an area of blue-collar suburban Detroit that helped deliver the presidency to Trump.”

Viser explains that losing voters like Daudert in the Midwest could be fatal for Trump in 2020. The story also notes that now-Gov. Gretchen Whitmer, a Democrat, won Macomb County by 4 points last year with a “campaign that barely mentioned Trump and instead promoted basic bipartisan governance, with the slogan: ‘Fix the Damn Roads.’”

The triple-bylined story from Burns, Jonathan Martin and Maggie Haberman notes that Trump’s advisers are very concerned about the Upper Midwest, which put him over the top in the 2016 Electoral College:

“Privately, some of Mr. Trump’s 2016 aides have said they are pessimistic about his path to 270 electoral votes after his party’s midterm defeats in states like Michigan, Pennsylvania and Wisconsin. An Associated Press poll on Wednesday showed that Mr. Trump’s overall approval rating had fallen to 34 percent, with his support among Republicans dipping below 80 percent — a startling turn for a president who strives for total control of the G.O.P., and has usually achieved it.”

With an eye on the 2020 election, hundreds brave winter storm...

With an eye on the 2020 election, hundreds brave winter storm...