Despite opposition to the project from Michigan’s new Democratic governor and attorney general, the Department of Environmental Quality (DEQ) has issued a permit to Canadian energy company Enbridge to begin its controversial oil and natural gas pipeline tunnel project.

This also comes after environmentalists have called on Gov. Gretchen Whitmer to shut down the pipeline, as a computer system that monitors the area around the pipeline is offline during the partial federal government shutdown.

Both DEQ spokesman Scott Dean and a spokesman for Enbridge confirmed that the company had its permit request approved this week to begin soil and rock sampling.

The samples are a preliminary part of a project to replace the 65-year-old Line 5 — which snakes through the Straits of Mackinac — with a new pipeline 100 feet beneath Great Lakes rockbed.

Enbridge spokesman Ryan Duffy said the sampling is the first step in beginning the $500 million project, which may take years to complete. The company still needs a second permit to be approved by the U.S. Army Corps of Engineers before it can begin sampling.

“For the last few weeks, we just are excited about moving forward with the tunnel project,” Duffy said. “So the rock and soil sampling is really the first step, and the data from that will guide the project and how the tunnel’s gonna be built.”

Line 5 carries about 23 million gallons of oil and some natural gas through the straits each day. Environmental researchers have said a spill could devastate Great Lakes shoreline, despite assurances from Enbridge that the pipeline is safe.

The tunnel plan has received powerful pushback from both Whitmer and Attorney General Dana Nessel.

Both vowed during their 2018 campaigns to shut the pipeline down.

Nessel’s office is now engaged in a legal review of a law passed late last year in the GOP-controlled Legislature before she and Whitmer were inaugurated that, in effect, allowed the Enbridge plan to move forward despite their opposition.

Whitmer asked Nessel to conduct the review on Jan. 2 and it’s expected to be completed by the end of winter.

Whitmer’s and Nessel’s spokespersons did not immediately return messages to the Michigan Advance regarding the permit approval.

The attorney general has said she has “serious and significant concerns” with the law, “which the previous governor and Legislature initiated and passed without the care and caution one would expect for an issue that will have a monumental impact on our state.”

Dean said the company applied for the permit last year, which coincided with discussions on the plan — now law — that created an independent pipeline panel which approved the company’s tunnel project. Panel members were appointed by former GOP Gov. Rick Snyder, who supported the Enbridge plan. It was one of his final acts as governor.

The DEQ held a public hearing for the permit application on Nov. 27, more than two weeks before Snyder signed the law creating the panel, the Mackinac Straits Corridor Authority. Once the new pipeline and tunnel are built, the new authority would oversee the tunnel.

Dean said the ongoing attorney general review of the law creating the new pipeline authority did not impact the DEQ’s approval of the Enbridge sampling permit.

Although Enbridge will cover the entire cost of replacing Line 5 with a new buried version, Whitmer and Nessel have both questioned whether the risk to the Great Lakes is another price worth paying.

The company argues Line 5 has operated safely for 65 years and says the risk of oil spilling into the Great Lakes will fall to virtually zero with a new buried pipeline.

The partial federal government shutdown — the longest in the nation’s history — also is playing a role in the debate around the pipeline.

A federally operated computer monitoring system meant to model currents in the Straits of Mackinac and direct cleanup crews in the event of a Line 5 oil spill is temporarily offline due to the shutdown. It’s a “crucial” part of Michigan’s response if there were a Line 5 rupture, MLive reported last week.

A coalition of environmental groups, Oil and Water Don’t Mix, has called on Whitmer to shut down the pipeline while the spill response system remains offline.

“State leaders simply cannot allow our ability to protect the Great Lakes from a catastrophic oil spill to be another casualty of the disastrous Trump shutdown. Oil and Water Don’t Mix is calling on our Governor and Attorney General to take swift action to stop the flow of oil through the Straits until this shutdown is over,” Sean McBrearty, Oil and Water Don’t Mix campaign coordinator, said in a statement.

On Wednesday, a spokeswoman for Whitmer’s office described the situation as “suboptimal,” but said other monitoring systems are in place.

“While not having the Great Lakes Environmental Research Laboratory’s (GLERL) marine forecasting system data is suboptimal, other data sources continue to be available and coordination continues with internal and external partners to ensure monitoring and response capabilities in the Straits,” Whitmer spokeswoman Tiffany Brown said. “The state of Michigan’s emergency and technical staff will continue to monitor the situation in cooperation with Enbridge, the Coast Guard, and others, to ensure parties remain in unison.” 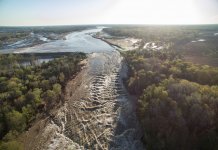