The five candidates running for Michigan Democratic Party (MDP) chair have all pledged to build on last year’s wins at the top of the ticket.

The election will occur at the state convention, which will be held on Saturday, Feb. 2 at Cobo Center in Detroit. Current Chair Brandon Dillon, a former state representative who took the helm in 2015, has declined to run for a third term.

The hopefuls to replace him are MD Alam, Lavora Barnes, Patrick Biange, Greg Bowens and Lisa DiRado. The Washtenaw County Democratic Party sponsored a forum for candidates on Jan. 5.

In recent days, two candidates have dropped out of the MDP chair race. They are Rochell Kirby of Lathrup Village and Nancy Quarles, an Oakland County commissioner from Southfield and MDP first vice chair. 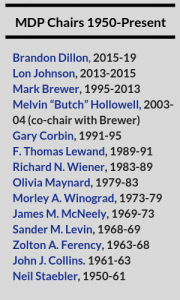 Melvin “Butch” Hollowell was the first African-American to lead the party when he was co-chair with Brewer in 2003 and 2004. And Olivia Maynard was the first female party chair, serving from 1979 to 1983.

Here is a look at the MDP chair candidates and their priorities, listed in alphabetical order:

Alam is a Detroit resident, U.S. Army veteran who served during the Iraq War and chaired Muslims for [Bernie] Sanders during the 2016 Democratic presidential primary campaign in Michigan.

If elected MDP chair, Alam said he would expand the number of party caucuses and committees to be more inclusive throughout Michigan’s 83 counties. He would adopt a “small-donor style, Bernie Sanders campaign financing model” for party fundraising. Lastly, Alam said he would concentrate on Dems winning back the state House and Senate. His campaign website is here.

Lavora Barnes, the MDP’s chief operating officer since 2015, is widely seen as the frontrunner for the post. As the Advance first reported, Barnes has been endorsed by Dillon, Gov. Gretchen Whitmer and Attorney General Dana Nessel. In recent weeks, she has picked up support from Lt. Gov. Garlin Gilchrist, the UAW and AFSCME Council 25.

The Advance did a profile in December on Barnes, who’s done communications for the President Clinton White House and has worked in Michigan politics since 2004. She’s worked for the House Democratic caucus and ran former President Barack Obama’s Michigan re-election campaign.

Barnes said her priority is to strengthen and increase MDP’s presence in Detroit and urban population centers throughout Michigan, while maintaining rapid growth in the rural area.

She said she would also empower local parties with expanded grassroots infrastructure, regular digital assistance and additional training. Finally, she pledges to “ensure MDP’s voice is heard on the national stage, so the 2020 Democratic field recognizes the road to the White House runs through Michigan, while maintaining control of the statewide field campaign to ensure that we are positioned to win elections up and down the ticket.”

Biange is a St. Clair Shores resident who has announced past runs for governor, Congress and state House. In an email to supporters, he said he was progressive before Sanders and called himself the “most diverse Progressive in the country.” Biange’s MDP chair campaign platform agenda centers on what he calls the “Thermo-Dynamic Economics Bill.”

“We will create and maintain jobs in sustainable energy, agriculture, transportation, and manufacturing infrastructure,” Biange said. “Our jobs will include clean and renewable energy construction and operations; energy-efficient grid retrofitting for smooth transformation away from fossil fuel; intra-city mass transit and inter-city railroads; building renovations and insulation retrofits; and complete street designs that encourage safe bike and pedestrian traffic alongside accessible public transit.

“We will integrate nutrition based on sustainable and organic agriculture that creates employment in the food and culinary professions. We will nurture the organic crops and manufacture the recycled products needed to support our renewable economy. Our goal is to create a strong economy with fair wages that supports sustainable and meaningful platforms in accordance to 21st Century technology.”

A Grosse Pointe Park resident and public relations executive, Bowens was previously press secretary for former Detroit Mayor Dennis Archer. Bowens is a U.S. Navy veteran and former Detroit News and Congressional Quarterly reporter. He is the co-founder and president of the Harper Woods-Grosse Pointe NAACP.

Bowens is a longtime Democratic activist, who is a precinct delegate, 14th Congressional District executive committee member and member of the Grosse Pointe Democratic Club.

He said he believes that MDP must recruit younger people into its ranks. He also wants to strengthen the party’s accountability and messaging to its members as well as increase membership.

Bowens touts his experience from being on strike during the 1990s as a member of the Detroit Newspaper Guild to leading the public fight to win the strike with the American Federation of Musicians against the Detroit Symphony Orchestra. He also successfully worked with the nurses at Flint’s Hurley Medical Center to win a contract and end a two-year labor dispute.

As Northville Democratic Club president, DiRado said she “rebranded our group with values-based messaging, grew our membership by 300+ people, and improved our fundraising strategies to generously support Democratic candidates.” She notes that Democrats flipped many seats in the area last year.

She is also a Michigan Democratic Party precinct delegate and a member of both Northville Indivisible and the 11th District Democrats.

DiRado’s top three objectives as MDP chair would be to: 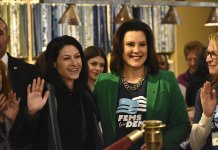 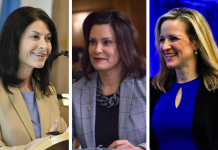