The Michigan Supreme Court on Wednesday unanimously elected Bridget McCormack to serve a two-year term as chief justice. She succeeds Stephen Markman and becomes only the sixth woman to serve in the post.

“Michigan’s courts must be accessible to all, engaged with the communities they serve, independent of political pressure and efficient in making the best use of public resources,” said McCormack. “My goal is to build on past achievements while redoubling our efforts to help Michigan’s judiciary become more responsive to the public we serve.”

The new chief justice has forged strong relationships with her GOP-nominated peers, particularly David Viviano and Elizabeth Clement, who angered Republicans by voting to put the anti-gerrymandering Proposal 2 on the 2018 ballot.

Viviano will serve as chief justice pro tem, a newly created post. He will focus on court technology and administrative reforms “to improve service and responsiveness to the public.”

McCormack’s rise makes Michigan history: It’s the first time that the governor, attorney general, secretary of state and chief justice are all women. Michigan is the only state in the nation with women in all four leadership posts: Gov. Gretchen Whitmer, Attorney General Dana Nessel, Secretary of State Jocelyn Benson and now McCormack.

Markman did not run for re-election. There had been speculation that he would resign before now-former Gov. Rick Snyder left office, so the Republican could appoint a conservative jurist. Detroit News editorial page Editor Nolan Finley wrote about his concern about the GOP losing its grip on the high court if Markman stayed on, which he ultimately did.

“I am grateful to former Chief Justice Markman for his leadership,” McCormack said. “He worked diligently for the people who rely on our courts, and we are all thankful for his service.”

The court chooses a chief justice every two years. McCormack’s election occurred on the same calendar date, Jan. 9, that Republican-nominated Mary Stallings Coleman became the first woman in Michigan Supreme Court history to serve as chief justice. That was in 1979.

On this day in 1979:
Justice Mary Stallings Coleman becomes the first woman to serve as @MISupremeCourt chief justice. pic.twitter.com/dH8lgH5hjj

“While I was the chief justice, Justice McCormack worked very closely with me and no one was more committed to reforming the judiciary to become more service-focused,” said Young. “She is an energetic and inspired leader. I look forward to watching her move Michigan’s judiciary forward to better serve its people.” 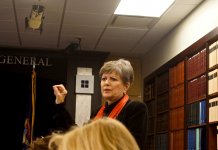 Susan J. Demas: Women keep having to fight the same battles in Lansing