As the Michigan House of Representatives reconvened on Wednesday, two bills aimed at criminal justice reform reemerged as priorities for lawmakers.

The legislation, which would require a conviction before law enforcement officials could seize private property using the state’s civil asset forfeiture process, have bipartisan support including from state House Speaker Lee Chatfield (R-Levering), who was unanimously elected on the floor to lead the chamber the GOP caucus chose him last year.

Speaking to reporters today, Nessel, the state’s top law enforcement official, said a few parts of the civil asset forfeiture legislation still need technical work, but she supports the idea of requiring a conviction to seize property like cars and cash.

As a former private attorney and prosecutor, Nessel said she has dealt firsthand with cases where property is seized. She added that any unjust use of the practice only harms police-community relations.

“In terms of law enforcement, you know it doesn’t create a very good connection between law enforcement and the community when people feel the police are wrongly taking their assets,” Nessel said. “And so I think this is actually going to make those relationships stronger.”

Similar legislation passed the House last year only to die in the Senate. This time around, the sponsor of last year’s bill, then-Rep. Peter Lucido (R-Shelby Twp.), is now a senator and will chair the Judiciary Committee, where the legislation would likely head should it pass out of the House.

The practice of civil asset forfeiture can represent significant money for local units of government and police departments. The Mackinac Center for Public Policy, a Midland-based, free-market think tank, reports that in 2017 there were 956 cases in Michigan in which law enforcement officials seized property without either a charge or a conviction.

Wentworth said he believes the bills strike a balance between allowing law enforcement to do their job and ensuring due process for citizens.

“This solution is simple,” Wentworth said. “Requiring a conviction is common sense. It still allows law enforcement to do their job. They should be commended for the job they do; they do a fantastic job. This just presents due process rights for citizens and there’s also an exemption in there for a plea deal, as well. … I think it’s a common sense solution to this problem and I’m looking forward to getting it through.”

To Chatfield, the broad support for reforming the state’s system of allowing property seizure was why this issue got the honor of the first bills of the session.

“This is about fixing an outdated criminal justice system. And this was the first step to doing it,” Chatfield said. “And we can do it in a bipartisan way that ensures the people of our state our service. This is putting people above politics.” 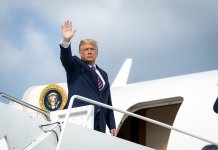 Former DHS official: Plot against Whitmer was ‘reminiscent’ of ISIS