In one of the first signs of a return to divided government in Michigan, the state’s GOP-controlled Senate will once again begin formally vetting appointments by Democratic Gov. Gretchen Whitmer.

The function, known as advice and consent, is outlined as a key role of the upper chamber in the Michigan Constitution. The practice had largely been abdicated during Republican Gov. Rick Snyder’s administration when the GOP controlled both legislative chambers for all eight years.

Republican former Senate Majority Leader Ken Sikkema (R-Wyoming), who was termed out of office in 2007, told the Advance today that the body’s advice and consent role was “lackadaisical” and “pretty quiet” during the Snyder years.

Whitmer served as Senate minority leader for Snyder’s first term from 2011 to 2015, in which the Senate did not have a panel to review the governor’s appointments for everything from key cabinet posts, like director of the Michigan State Police, to members of commissions like the Michigan Board of Respiratory Care.

Whitmer Press Secretary Tiffany Brown struck a conciliatory note and said the administration is confident that the committee will give its wide variety of already-announced appointments and nominees a fair shake.

“We have confidence in Senate Majority Leader Mike Shirkey and his Advice and Consent Committee Chair designee, Pete Lucido, and look forward to a fair and thorough process,” Brown said.

GOP former Senate Majority Leader Randy Richardville (R-Monroe) led the Senate during Snyder’s first term. He said that given the frequent and open contact between his caucus and Snyder’s office, a formal process wasn’t deemed necessary at the time.

Richardville also noted that one of Snyder’s early nominees, former House Speaker Andy Dillon (D-Redford), who served as state treasurer, would have been “difficult” to get past the GOP caucus. That played into the decision to do away with a formal advice and consent process, he said.

Nonetheless, Richardville said that in time of divided government, a formal committee can be good for bipartisanship.

“When it’s different parties, there’s not as much dialogue in advance and this just helps to force the dialogue,” Richardville said.

In an email to the Advance, Shirkey spokeswoman Amber McCann said that the re-emergence of a formal committee for appointments is simply a reorganization and that in the previous term, appointments were overseen by a variety of committees.

McCann added that she agreed with Sikkema that GOP former Senate Majority Leader Arlan Meekhof (R-Grand Haven Twp.), who was termed out at the end of 2018, didn’t do many advice and consent hearings during Snyder’s second term.

It was a different story for Democratic former Gov. Jennifer Granholm.

During her last year in office in 2010, then-Senate Majority Leader Mike Bishop (R-Rochester) — who would go on to lose his congressional seat in 2018 — held up several of her appointments.

Bishop argued that a term-limited executive shouldn’t have the right to name officials whose terms would start during the new governor’s tenure.

However, the GOP-controlled Senate in 2018 didn’t have the same qualms. Snyder also made appointments late in Lame Duck to a brand-new panel, the Mackinac Straits Corridor Authority (MSCA) overseeing a new tunnel encasing Enbridge’s Line 5 pipeline.

The authority already approved the deal with Enbridge before Whitmer — who had vowed to shutter Line 5 — took office. The six-year appointments expire in December 2024 — two years after Whitmer’s first term will end.

Sikkema was a longtime GOP lawmaker and served as Senate majority leader from 2003 until 2007 during Granholm’s first term.

Although he believes the Senate didn’t exercise much oversight in the Snyder era, Sikkema said he doesn’t think any unqualified people were appointed to high-level positions. That even goes for the departments of Environmental Quality and Health and Human Services, which took fire for their roles in high-profile controversies like the Flint water crisis.

“It’s hard to answer, but generally I’d say ‘no’,” Sikkema said when asked whether there was any detriment to the state due to the diminished oversight. He added that cabinet positions and department heads were filled by people with considerable experience in those fields.

“I don’t think it would have made any difference,” said Sikkema, now a senior policy fellow with Public Sector Consultants, a Lansing-based public policy firm.

Advice and consent on appointments also stands as one of the key duties of the U.S. Senate, as outlined in the Constitution.

Currently, President Trump has several acting cabinet members, including the attorney general and interior secretary, which do not have to get Senate approval.

“I like ‘acting’,” Trump said this week. “It gives me more flexibility. Do you understand that? I like ‘acting’. So we have a few that are acting. We have a great, great cabinet.”

To Sikkema, the new GOP-controlled Michigan Senate could take one of two paths with Whitmer’s appointments. It could be adversarial and obstructive or it could take its “proper role” and simply vet candidates for their background and “basic competence” before letting them take start their position.

“Gov. Whitmer was elected … and has the right to appoint people with the same philosophy and ideology she has,” Sikkema told the Advance. “The role for the Senate is proper vetting for history, background and competence.”

That sentiment also rings true to Richardville, who said he hopes the new dynamic of divided government in Michigan doesn’t turn into the kind of partisan gridlock in the nation’s Capitol.

“There are legitimate questions about appointments, but if you want to be obstructionist … that’s going to come out,” he said. “I hope nobody looks to Washington, D.C., as to how this works. This is a real opportunity to show the rest of the world that people can get along.” 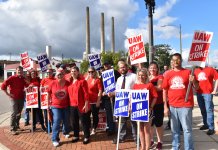 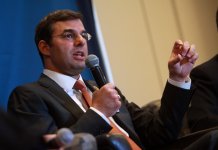