In her fourth day as governor, Whitmer signed an executive directive instructing the state department responsible for selecting contractors that work with Michigan to “identify and reduce barriers for geographically disadvantaged businesses” by awarding such businesses more state contracts.

The goal is to create “equal opportunity,” Whitmer told reporters today at a press conference.

Flanked by Lt. Gov. Garlin Gilchrist II and small business owners, the Democratic governor said executives at many small businesses in cities like Detroit and Flint or low-income rural areas share “a sense that the wheels are greased for people who are incumbent contractors.”

In her first week, Whitmer has signed seven other executive directives. On Wednesday, Whitmer signed her first executive directive aimed at preventing health and environmental crises. Whitmer on Thursday banned campaigning on state money and private email usage for state business. She also stated she plans to veto legislation that includes an end-run around the referendum process.

The Department of Technology, Management and Budget selects contract bids on everything from road salt to state computer software. The new directive encourages DTMB to select more businesses for such contracts from poorer areas of the state.

These are economically distressed areas eligible for certain tax benefits, such as parts of Wayne County. More maps of such areas can be found here.

Whitmer said the directive is not meant to give an edge to businesses in lower-income communities. The goal is “leveling the playing field,” she said, adding that the new directive will not increase costs.

“No, in fact, I think we’re gonna find a lot of savings for state government and the taxpayers,” she said.

The order directs the DTMB to, by March 31, give preference to contracts with businesses in low-income areas or “underutilized business areas” with the long-term goal of having 3 percent or more of annual state expenditures made up of such contracts by 2022 or 2023.

In final debate, Trump slams pandemic aid as a ‘big bailout’ for blue cities and states 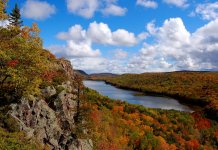 Here are two statewide ballot proposals you should know about