Clare Liening, a spokeswoman for the Whitmer transition, told the Advance that there would be no further appointment announcements before the inauguration on Tuesday.

Whitmer has tapped Tricia Foster, who served as treasurer for the Whitmer campaign, to direct the Department of Technology Management and Budget (DTMB). Foster retired in 2016 after more than 20 years in an executive role at CBRE Martin, a real estate services and investment firm.

“Trish has vast leadership experience and a deep commitment to public service,” Whitmer said in a statement. “She will provide the guidance needed to ensure our state government is responsive and adaptive to the needs of our residents.”

Farah Hanley, currently a deputy director for finance operations at DHHS, will take over as acting director of the massive organization until a permanent director is named, likely sometime next month, according to the statement.

Whitmer had reportedly floated the idea of breaking up the 14,000 employee department before deciding against it, saying that the new director will “inspire confidence.”

Stephanie Beckhorn, who has a background in workforce development, will serve as acting director of TED.

Today’s appointments come after a slew of announcements on Thursday, which made up the bulk of Whitmer’s future cabinet. That included one holdover from the Snyder administration, Heidi Washington, who will continue to run the state’s Department of Corrections. Paul Ajegba was named Michigan Department of Transportation director and Liesl Eichler Clark will head up the Department of Environmental Quality.

“We have been working diligently to get a strong cabinet in place and now we are ready to get to work for the people of Michigan,” said Whitmer. “This Cabinet builds on a foundation of immense expertise and a dedication to public service that will guide our efforts to improve the lives of the people of this state each and every day.” 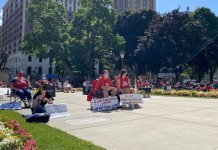