During the course of the 2018 campaign, Democrat Gretchen Whitmer was frequently asked by reporters about — and attacked by opponents for — her father’s former job.

The governor-elect served 14 years in the Michigan Legislature, including four as Senate minority leader. She’s an attorney, a former University of Michigan Gerald R. Ford School for Public Policy instructor and was Ingham County prosecutor.

Her mother, Sherry Whitmer — who died of cancer during the governor-elect’s first term in the state House — was an assistant attorney general under the longest-serving AG in U.S. history, Democrat Frank Kelley. But Gretchen Whitmer wasn’t asked much — if at all — about her mother’s public service on the campaign trail.

However, her father, Richard Whitmer, was the subject of considerable attention and negative stories. He had served as Commerce director under GOP former Gov. William Milliken, but it was his post-government career as CEO of Blue Cross/Blue Shield of Michigan that his daughter was constantly asked about. Later, his former job became a staple of attack ads.

This reporter was frequently asked by national outlets to comment on Whitmer’s campaign in light of her father’s former position. No journalists ever inquired about the family ties of El-Sayed, Thanedar or Whitmer’s general election opponent, Republican Bill Schuette, an heir to the Dow Chemical fortune.

There was also a well-documented effort of Democratic powerbrokers to recruit a white male gubernatorial candidate as an alternative to Whitmer, including University of Michigan Regent Mark Bernstein, now-U.S. Rep.-elect Andy Levin and U.S. Sen. Gary Peters (D-Bloomfield Twp.).

In the Aug. 7 Democratic primary, Whitmer proved the naysayers wrong, easily winning a three-way race by 22 points — and taking all 83 counties. In the Nov. 6 general election, Whitmer went on to dispatch Schuette by 9 points — a victory that turned many national heads, as Michigan voted for now-President Donald Trump in 2016.

In an exclusive interview with the Michigan Advance this week, Whitmer didn’t hold back when asked if sexism was a factor in coverage of her campaign.

“Well, I think that would be rational conclusion [for] the disparate treatment,” Whitmer said on Monday. “I am a 47 year old woman. I’m a lawyer; I’m a former prosecutor; I was the top Democrat in the Legislature for four years. And when I declared my candidacy for governor, it still was being written where my father had worked.

The governor-elect also talked to the Advance about attacks on the first female governor in Michigan, Democrat Jennifer Granholm, who was in office while Whitmer served in both the House and Senate. Schuette frequently compared Whitmer to Granholm in the campaign, even mixing up their names. And Whitmer discussed her own time in a GOP-controlled Legislature and what she learned from it.

The Advance previously ran stories from the interview about Whitmer endorsing Michigan Democratic Party Chief Operating Officer Lavora Barnes for the party’s next chair, her criticism of Lame Duck, and her lack of interest in joining the 2020 presidential ticket. A final story from the interview, in which Whitmer discusses roads, Michigan’s economy and what she’ll do differently in Flint, will run after the Christmas holiday.

The following are excerpts from the interview on Monday:

Michigan Advance: During the campaign, you were frequently asked by reporters about your father’s former position at Blue Cross and even your husband’s finances. Your opponents, like Republican Bill Schuette and Democrat Abdul El-Sayed, were not asked much about their families’ fortunes or their wives. Do you think that sexism was a factor?

Whitmer: Well, I think that would be rational conclusion [for] the disparate treatment. I am a 47 year old woman. I’m a lawyer; I’m a former prosecutor; I was the top Democrat in the Legislature for four years. And when I declared my candidacy for governor, it still was being written where my father had worked. And I didn’t see that of any of my male counterparts. I’ve never seen that of any of my male counterparts, for that matter.

Michigan Advance: How did you deal with that as part of the campaign? Because that could have turned into a big focus.

Whitmer: Well, I ignored it. I’ve learned to just tune out the superficial barbs, because I think engaging is a waste of energy in some respects because the people that it’s persuasive with aren’t gonna get swayed and the vast majority of people think it’s nonsense.

Michigan Advance: So you served actually more than 14 years in the Legislature. But having covered you [as a reporter], I know you didn’t always have an easy time with Republicans, some of whom insisted on referring to you as the ‘junior senator,’ even when it wasn’t your first term. How are you planning to approach a similar setup where you have Republicans in charge — and a mostly male Republican caucus in both chambers — and you’ve seen how divided government has worked because you were part of that in the Legislature and you know all the pitfalls?

Whitmer: Well, I start off very optimistic. I have a sober view though of what it’s gonna take to be successful here. And I know that the ugliness that was directed at the last Democratic governor [Jennifer Granholm] is a very real possibility [and] that there will be people that treat me just as disrespectfully.

But you know what? I am more energized than ever that the people of our state want me to go in there and to do this job and use every tool available to deliver on the agenda I ran on. I know that there are Republican legislators from districts that I won by double digits, who I believe are going to want — and need — to work with me in order to deliver on the agenda that they ran on too, that overlapped with mine.

And so I am tough; I will use that veto pen. I will use the bully pulpit, but I will also first start with trying to build bridges.

Michigan Advance: When you talked about the last Democratic governor being treated disrespectfully, do you think that sexism was part of that?

Whitmer: Well, I do. I remember a senator standing on the Senate floor referring to the sitting governor has ‘Hurricane Jenny,’ and it was so incredibly disrespectful — and certainly not the worst thing that was leveled. But it came right off of the Senate floor from someone who should at least have respect for the office, if not the person who holds it.

And so while I continue to meet with Gov. [Rick] Snyder, he keeps telling me to use his first name, but I believe that the office deserves respect and I have a hard time not calling him ‘Governor.’ And I know that we deserve better. And we need leaders who are going to emulate the kind of conduct we hope and want to see from our children — and calling names from the Senate floor to the highest ranking person in political life in the state undermines all of that. And so I’m hopeful I won’t have to deal with a lot of that, but I’ve got thick enough skin that if I have to, I will.

Michigan Advance: Who was the senator?

Michigan Advance: The same one who called you the ‘junior senator’?

Whitmer: Right. Yep, he didn’t do that to men either, to your question. 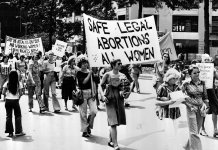 Whitmer: ‘Rational conclusion’ that sexism was a factor in campaign coverage