Fewer than half of Michigan third-graders earned a proficient score or higher on the English language arts test, according to results from the 2018 Michigan Student Test of Educational Progress, better known as M-STEP. The data was released in August by the Michigan Department of Education.

The startling news has thrown some school districts and communities for a loop and pressed them to provide a remedy so their children make the grade.

In 2016, the Michigan Legislature passed a law that requires schools to identify children who struggle with reading and writing and provide them with additional assistance. The law states that third graders may repeat the grade if they are more than one grade level behind, beginning with the 2019-20 school year.

Detroit Parent Network, a nonprofit advocacy group, held a community forum last month to offer insight into the new law and provide strategies designed to help students, both at school and at home. A follow-up meeting is scheduled for Jan. 17, where policy experts will be on hand to answer questions.

Additionally, longtime Detroit parent activist Helen Moore has launched a separate effort called “Let’s Read.” Moore leads an organization, Keep the Vote, No Takeover, which has partnered with the National Action Network, Detroit Chapter to recruit volunteers who will go into 70 city schools to address the challenge.

“We found that too many children can’t read in Detroit schools,” Moore said. “We decided that rather than sit around, we had better get in there and help our children read.”

At Moore’s request, more than three dozen educators, parents and activists attended a community meeting at the Dexter-Elmhurst Center on Detroit’s west side on a chilly Tuesday evening to mobilize and create an action plan.

“Participation is essential, because we as a district cannot do this alone,” said Nikolai Vitti, Detroit Public Schools Community District general superintendent.  “Community organizations can assist in expanding awareness of the requirement but also rally the community to assist us in empowering and building the capacity of our parents and families.”

Correction: The story originally had an incorrect telephone number for Helen Moore. 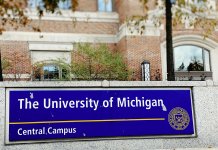 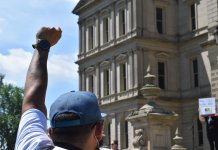 Study: 97% of Black Lives Matter protests have been peaceful in Michigan