Environmentalists say Gov. Rick Snyder’s requested $43 million in additional funding to tackle contamination from a suite of chemicals abbreviated as PFAS is a good start.

PFAS has been linked to a host of health problems, including developmental disorders such as autism and cancer. But as more news about fouled water emerges across Michigan, officials are scrambling to get a grasp on the extent of the contamination and how companies that have discharged pollutants might be held responsible for covering cleanup costs.

Private companies may well end up playing a role in future cleanup funding, a cost likely to climb, experts say.

“Nobody knows how much it will take,” said Bob Delaney, a geologist with the Michigan Department of Environmental Quality (DEQ) who in 2012 tried to warn then-department chief Dan Wyant that PFAS constituted a major health and environment problem in Michigan. “We’re stressed for personnel right now. There’s just a lot coming at us, and even though they’re hiring new people, there’s just [only] so much any of us can do.

In the meantime, Snyder’s supplemental funding request would help cover ongoing investigation and cleanup at known PFAS contamination sites. So far, the state has identified 34 sites across the state where chemicals have leached into groundwater.

The money Snyder has asked for would go primarily to investigating known sites of contamination.

“That funding is really looking at identifying and dealing with what we’ve seen so far,” said Kurt Weiss, spokesman for the State Budget Office. “Certainly we’re gonna have to look at additional funding down the road, I’m sure.”

In 2017, Snyder launched the PFAS Response Team, the nation’s first multi-agency team dedicated to investigating the extent of statewide contamination and has been aggressive in testing for the chemical.
In January 2018, Michigan adopted an enforceable action limit of 70 ppt for PFOS and PFOA, two chemicals in the suite of PFAS substances. The rule makes the U.S. Environmental Protection Agency’s (EPA) PFAS recommendation limit for drinking water enforceable for ground water in Michigan, although the state still lacks an enforceable drinking water limit.
The state also has been active in investigating contamination across Michigan with the funds available to the department and has supplied grants for PFAS filtration systems in some cases.

But environmentalists say much more needs to be done. In addition to investigation and cleanup, they argue the state should lower the acceptable groundwater limit of 70 parts per trillion for per- and polyfluoroalkyl substances.

They also point out that there is currently no state or federal standard requiring cleanup for PFAS found in municipal drinking water systems, such as the Ann Arbor public water system.

“I think it’s a major gap and I think it’s something Michigan should absolutely consider doing very soon to protect people’s health,” said Oday Salim, an environmental lawyer for the National Wildlife Federation.

Nationally, “almost no state has an enforceable public water supply standard for any of the PFAS (chemicals),” Salim said.

Democrats have been vocal critics of that fact.

“Without an enforceable PFAS drinking water standard, additional resources will not stop the PFAS crisis,” said House Democratic spokeswoman Samantha Hart. “We can’t just throw money at the problem. We need to pass a law that creates enforceable drinking water standards, like the one Rep. [Winnie] Brinks (D-Grand Rapids) introduced nearly a year ago, so we can hold polluters accountable and clean up our water for good.”

Brinks’ legislation calls for reducing two chemicals in the PFAS class of substances from 70 parts per trillion to 5 ppt in both groundwater and municipal drinking water.

The legislation has languished in a House committee since it was introduced in December 2017. House Natural Resources Committee Chair Gary Howell (R-Lapeer) has no plans to move the bill to the full House floor during the Lame Duck session, said his legislative director, Mike Goschka.

Howell’s staff and other committee members plan to dig into whether the state’s current 70 ppt standard should remain, Goschka said.

“It may be too low — it may be too high,” he said. “At this point … we really don’t know enough about the PFAS issue. What [Howell] would like to do is start out from ground zero.”

Howell plans on holding an informational hearing to learn more about PFAS this week.

Businesses, meanwhile, dump the chemicals into state rivers and lakes on a daily basis, according to an MLive investigation that revealed state environmental regulators found PFAS in 18 wastewater treatment plants at levels more than 20,000 times the allowed amount into wastewater systems.

Testing data from the DEQ also shows that some level of PFAS has contaminated the drinking water of more than 1.5 million Michigan residents, MLive reported.

Taken together, the problem is massive in terms of its potential impact on human health, unknown future costs and legal battles likely looming over liability. 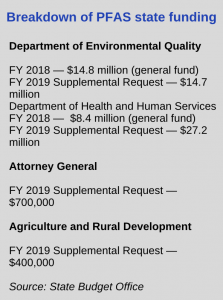 The funding is “a good start,” but it won’t be enough when it’s cleanup time, said Richard Rediske, senior program manager and professor at the Grand Valley State University Robert B. Annis Water Resources Institute.

“There’s money to sample it and continue sampling and analysis, but if we need to do excavations … the money will not be enough.”

James Clift, policy director for the Michigan Environmental Council, said it’s “clearly going to take more resources than is being requested in the budget to address PFAS contamination across the state.”

But he stressed that “a large portion of the funding should come from those companies that are or have used these chemicals and are reaping financial benefits from discharging these chemicals into our waterways.”

Ensuring that happens may mean lawsuits brought by the state’s attorney general, which would come at further cost to taxpayers.

In response, Snyder has proposed a fee increase of $4.75 per ton on landfill waste, up from the current cost of $0.36 per ton. That would generate about $79 million to help cover PFAS cleanup and investigation and other environmental cleanup down the road.

The proposal is one of the governor’s key lame duck legislative priorities. But that still may not be enough, environmentalists say.