As experts have recently questioned the sustainability of Michigan’s municipal funding structure, Lansing Mayor Andy Schor says that philanthropy could fill in some key financial gaps for communities.

When asked by The Advance at a press conference last week whether philanthropic funding presented a viable, long-term funding model for quality-of-life initiatives, Schor said, “I hope so. Because government can’t support all of the services it maybe once did.

“We have many partnerships with our nonprofits, with our faith-based community, with many of our companies — our corporates — that provide sponsorship for a variety of things.”

It might be surprising to some Lansing residents that it’s not their tax dollars, but private funding that bolsters amenities like free outdoor concerts in the summer. However, cities all across the state have lost out on real money used for basic services and recreational activities. Historically, the state has doled out tax revenue to Michigan’s municipalities to cover services. Over the last two decades, that revenue sharing has been on the decline, albeit with some slight upticks in recent years.

Data from the Michigan Municipal League (MML), a lobbying organization for the state’s municipalities, shows that Lansing has missed out on more than $100 million since 2002 as a result of those revenue sharing cuts.

The state’s municipal funding model and the increasing role that philanthropy and foundations play — from working to alleviate the effects of the Flint water crisis to the so-called “grand bargain” struck by the Legislature in 2014 that helped Detroit emerge from Chapter 11 bankruptcy — was the subject of a recent report in the Washington Post penned by professors from two of the state’s public universities.

Sarah Reckhow and Joshua Sapotichne, associate professors of political science at Michigan State University, along with Davia Downey, an associate professor of public administration at Grand Valley State University, wrote last week that they view Michigan’s structure of limiting local units of government’s ability to raise revenue as the main reason cities like Detroit and Flint turn to philanthropy as stopgap measures.

“Our research shows how Michigan policies sharply limit local governments’ and school districts’ ability to pay for infrastructure, personnel and other basic functions, creating a strong incentive for local officials to seek private funding,” the professors wrote. “As we explain below, these pressures are present in many states but intensified in Michigan.”

The professors argue that state mandates limiting municipalities taxing power has resulted in deferred maintenance for critical infrastructure, shortages for school funding and, in some cases, emergency financial management.

The MML has long called for the state to reverse course on the largely downward trajectory of revenue sharing.

“Michigan’s broken municipal financing model is almost a cliché,” MML Chief Operating Officer Anthony Minghine wrote in a 2014 column. “Talking about budget numbers and deficits in the billions of dollars can cause us to lose perspective. The fact is, there are a record number of local governments that find themselves in the midst of a financial crisis. Is it the result of mismanagement, neglect, or incompetence? Or is it the result of a dramatic dis­­­investment by the state in local government? I suggest the latter.”

While Schor says his city largely remains on sound financial footing and philanthropic support serves to enhance quality-of-life initiatives like outdoor summer concerts, MML data shows cuts to revenue sharing over the past two decades have cost the Capital City more than $100 million since 2002, according to MML figures.

Lansing is hardly the only mid-size Michigan city leaning on philanthropic support as a way of funding essential services or added amenities. In 2017, Kalamazoo launched the “Foundation for Excellence” in partnership with two local billionaire philanthropists, Bill Parfet and William Johnston.

For Kalamazoo, the foundation model sought to keep the city from having to implement an income tax while allowing for a decrease in property taxes, while also putting money toward a variety of long-term community goals, such as improved public infrastructure and “shared prosperity.”

Speaking with West Michigan news publication MiBiz last spring, one of the foundation’s founders said he believes the model was beginning to take hold.

“[The Foundation for Excellence] gets the community excited about its future and it gets people recognizing that these cities are important and that we’ve got to make them vital,” said Parfet. “You live there, you work there, you recreate there and you play there. And it’s working in Kalamazoo incredibly well.”

Schor appears to agree, saying last week that more targeted grants from federal organizations can help in “shoring up the extra things we need to do for our citizens” and lead to further economic development activity in partnership with local benefactors.

“Is it necessary to have concerts in the park every Wednesday? No,” Schor said. “Is that an amenity that you provide to your citizens as a great place to live? Yes. That’s placemaking. That’s having young millennials here and seniors here and families here. We do a lot of that work and it’s very important.”

Dan Kildee is ‘only moving up the ladder.’ So what’s next? 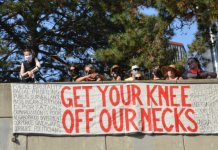